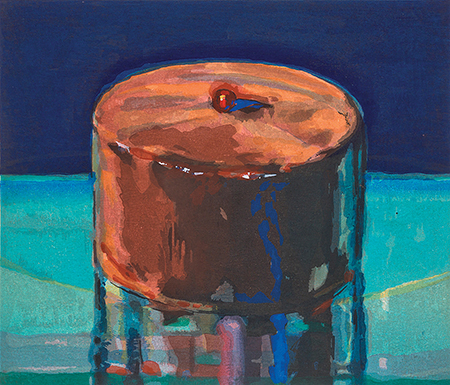 “Drawing is very central. Drawing, to me, is a kind of inquiring research tool that painting rests upon. I’ve drawn all my life.”
- Wayne Thiebaud, 1998

In 1962, Allan Stone Gallery in New York City hosted a one-person exhibition of Wayne Thiebaud’s “Confectioner” paintings. The show marked a turning point in the artist’s career, placing him and his work alongside the best-known artists and, above all, among the primary exponents of the Pop aesthetic that would come to reign over the art scene of the moment. These still-lifes of luscious desserts seemed to embody a popular language capturing the imagination of a consumer society that was becoming aware of and creating the art market. Yet, even as Thiebaud was attaining the iconic status of Andy Warhol’s multiples and Roy Lichtenstein’s imaginative appropriations of the cartoon visual narrative, Thiebaud was (and continues to be, as this exhibition attests) an exponent and practitioner of a painterly language driven by a constant interrogation of structure and form within and beyond representation.

This retrospective of Wayne Thiebaud's "Works on Paper, 1948-2004" and the accompanying catalogue, with a text by Michael Zakian, illustrate the artist’s evolution while emphasizing the differences between the aesthetic identities of the New York artists and this California artist as well as Thiebaud’s place in contemporary California art history. It also is a manifestation of the artist’s absorption with the graphic arts, with line, drawing and color, all the basic formal elements of his work.

Thiebaud earned his Bachelors and Masters degrees at Sacramento State University, an area that became familiar to him after being stationed at Mather Air Force while in the service during World War II. Although born in Mesa, Arizona (1920), Thiebaud’s family moved to Long Beach, California when he was a year old. During his adolescence, he began drawing cartoons and copying comics, seemingly simple adolescent pastimes that just happened to foreshadow coming genres of American aesthetics. The summer following his high school graduation, he was offered an apprenticeship at the Walt Disney Studios in animation, where he worked until joining the U.S. Air Force.

Back to Los Angeles in the mid-forties, he worked for Rexall Drug Company as a designer/artist, but at the urging and encouragement of Robert Mallery, a co-worker who became a well-known assemblage artist in the sixties, he began experimenting with expressionist painting. Mallery encouraged him further, talking to him about undergoing formal studies. In 1948 (that year marking the beginning of this retrospective) he participated in a group show at LACMA. What followed was his move to Sacramento and the completion of his academic degrees. He was promptly hired as an instructor at Sacramento Junior (now City) College. In 1956-57 during a leave of absence, he went to New York City and through the New School became friends with William and Elaine De Kooning, Franz Kline and Barnett Newman.

Upon his return to California, he was appointed to the faculty at the University of California, Davis, from where he retired with Emeritus status in 1967. He was by now developing still lifes, works that would define his style from this point in time.

Thiebaud patiently allowed for time and the hands-on experience of having drawn animation and design to hone his skills. Hidden are the vital experiences in the nascent art scene in the Sacramento Valley in which he played a role, the simmering, assertive bohemian San Francisco art environment, the Los Angeles’ scene of the forties and fifties. He absorbed the West Coast influence of Rico Le Brun (who taught at Chouinard), Herbert Jepson and at the Disney Studio, Howard Warshaw, William Brice, Francis De Erdaly and Seuo Serisawa. Above all, there was much to learn from the silence of nature, the structures of the city, and from teachers who were not too self-important to approach, to listen to a student, and to teach.

A student of art history, Thiebaud right to the present draws on the circle, the triangle and the ellipse as the major formal components that draw on the academic tradition of the old masters. Using these structures, he sees his work from the viewpoint that the geometric forms create the image. In a “Self Portrait" drypoint etching (1948), a head, covered with lines or hair that criss-cross assertively from left to right sits on shoulders (two triangles, while the face itself is an inverted equilateral triangle covered with lines (hair) that form triangles all over the face. Within the face, two round black circles (eyes) stare out at the viewer.

As Zakian points out in his catalogue essay and Thiebaud discusses, what creates the image is as much the association that the viewer finds between the title of the work and his/her expectations. “Large Sucker” (1971) is a circle divided into four green triangles on top of which lies a white Greek cross. A shadow image of the “sucker lies underneath, a kind of ellipse. The stick hangs beyond the surface on which the sucker lies, and the blue paint drips off of it as if the sucker has just been tasted." “Dark Cake” (1984) is vividly colorful, set off against a black horizontal block on the top and a shiny turquoise surface below. The cake is a reddish chocolate cylindrical form with a tiny red circle and a line on top - a cherry. The subject is sufficiently vivid that it leaves us with a basic biological urge to savor the cake, leaving us to struggle with the reasoned thought that what is real springs from Thiebaud’s head, a series of abstractions that awaken our consciousness.