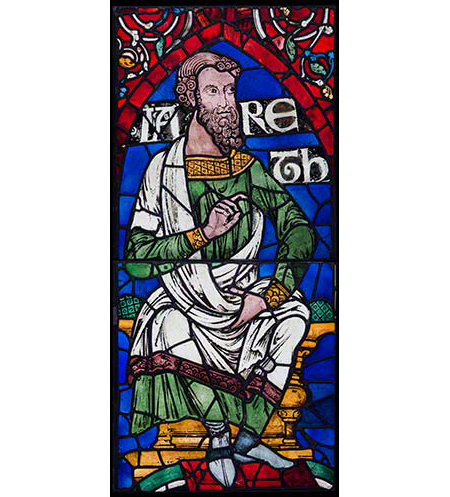 There is no need to endure the impositions of air travel out of LAX to stand at the feet of six emotionally powerful representations from the original eighty-six near life-size medieval stained glass figures depicting the ancestors of Christ in Canterbury Cathedral.  With details like facial features, hair and folds in their clothing hand painted on both sides of sections of glass that glow in saturated colors, figures including the old testament Jared and Noah are visually awesome. Temporarily removed from the great south window for conservation, the stained glass masterpieces of Romanesque art, in conjunction with liturgical ceremonies including readings, incense and music, were designed to emotionalize, personalize and reinforce the religious beliefs of the medieval populace following the Norman conquest.

These stunning windows, complete with their decorative panels, anchor "Canterbury and St. Albans: Treasures from Church and Cloister," an exhibition full of artifacts that historically attracted religious pilgrims to the cathedral. The reliquary casket of Thomas Becket, murdered in Canterbury Cathedral by order of Henry II in 1170 ("Will no one rid me of this troublesome priest?"), is here. Also dating from the twelfth century is a rare loan from the Cathedral Library in Hildesheim, Germany of the St. Albans Psalter. It's lavishly decorated imagery splendidly compliments the style, colors and subject matter of the windows. Because the Psalter (thought to have been owned by Christina of Makyate, a pious noble-born nun) is temporarily unbound for restoration, a generous selection of its dramatic pages is rotated into this exhibition of rarely seen medieval art (J. Paul Getty Museum of Art, West Los Angeles).