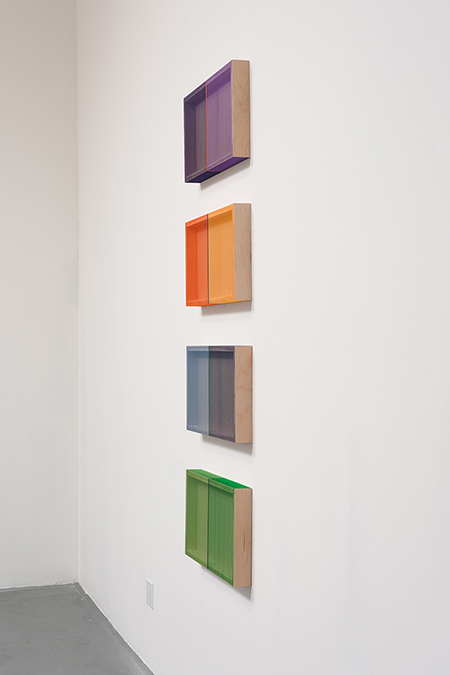 Brian Wills' formalist abstractions have distinguished themselves by merging over into sculpture, but more particularly by his use of rayon thread, which makes for a particular quality of stripe. His investigation of the rayon thread’s potential in various implementations – traditional vertical stripes; crossing vertical-horizontal square mandala patterns; strung across hollowed out sections of subtly painted or stained wood panels – has here led to its most visually dazzling iteration: two-sided wall works that jut out towards the viewer like the corner of a cube or column. Each side presents patterns that liquidly shift and modulate as you move across them.

You can't get the effect just by moving your eyes, you have to physically move around the piece, for which you're rewarded not only with several 'paintings' in one, but their respective transformations along the way. They firmly proclaim a key property of sculpture, while still being wall-bound. There are four such objects here, and they make the show. Their mesmerizing and ingenious effects are so charming that you’ll forgive suspecting them of only being novel visual ploys.