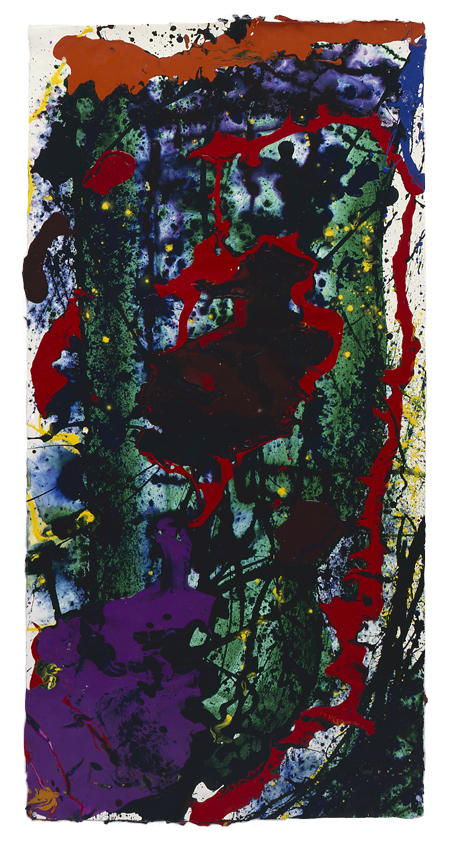 It is illuminating to view several early figurative paintings by an artist primarily known for his abstract expressionism. Happily, “Sam Francis: Five Decades of Abstract Expressionism from California Collections” is broad enough to encompass the artist’s little known landscapes. Several watercolors, from 1945-46, depict a country village, a migrant camp and a winter scene. These display little of the artist’s later penchant for bold, colorful paintings. Yet these early works contain the confident brushstrokes and composition that the mature Francis expressed. From these landscapes, Francis, who was born in 1923 in San Mateo, California, moved tentatively to abstraction, creating a few surrealist-inspired pieces. “After de Chirico” (1946) pays homage with its sharp angles and shadows, while its stark backdrop is Francis’ emotional response to the recent Hiroshima bombing. In the same year, he employed biomorphic and geometric forms in “Night Scene,” adding hints of cubism that portend his later abstract works.

In 1950, with “Untitled (of Fred Martin) [Red and Black],” featuring two large painterly red semi-circles that reference the female body, Francis began the kind of work he was known for until his death in 1994. The rest of this exhibition, including more than 100 paintings, is a feast of high octane color that segues from his sixties biomorphic orbs, featuring organic shapes in blues with splashes of primary colors; to his “Open, Edge, or Sail” works, featuring geometric frames surrounding vast swaths of white (often described as meditative and Zen influenced); to his late wildly colorful pieces. In the final period's smaller works (painted with his left arm, as his right arm was weakened from cancer), he filled the canvasses with explosions of color. These display a deft blending of color, shape, line and balance that temper an underlying chaotic presence that evokes strong emotion. Co-curator of this exhibition, Debra Burchett-Lere, explains in the catalog, “Before he passed away … he told us that his next group of paintings would encompass all his styles in a way … so his ‘Last Works,’ I think, started to explore this concept — all of his periods as one.”