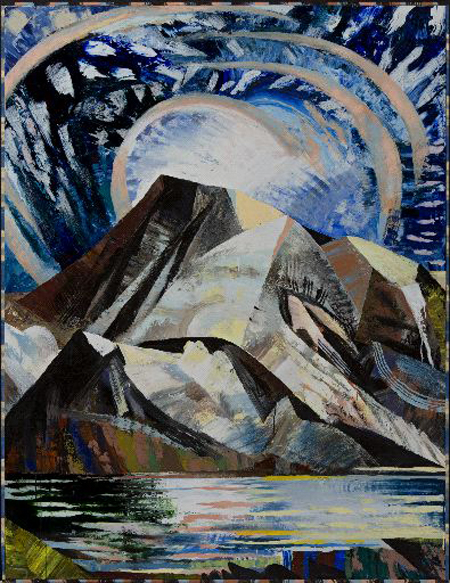 Lucinda Parker aces a (literally) tall assignment in her new suite of acrylic paintings, collectively entitled "All clouds choose the loftiest peak to pile themselves upon." That title is taken from Herman Melville’s Moby-Dick, but it applies directly to Parker’s subject in these luscious paintings: Mount Hood, the active, snow-capped volcano 60 miles to Portland’s east, which, at 11,249 feet, is Oregon’s tallest mountain.  Hood dominates the landscape for a radius of hundreds of miles and also tugs at Oregonian’s imaginations and regional pride.  As such it is a fitting subject for Parker, who is herself something of a Northwest institution.

In works such as the stately "From Owl Point" and "Catchment," Parker treats clouds, glaciers, rock, and lakes as coequal compositional elements, deploying large, richly loaded slathers of paint in arcing sweeps. While these gestures have a jubilant, improvised feel, they are impeccably precise in the artist’s compositional schemas, each gesture indispensable to each work’s architectonic structure. During the course of her long career, Parker has typically painted abstractly or semi-abstractly, but this foray into literality sees her in top form. These are topographies that make us feel as if we are gazing up at the roof of the world.