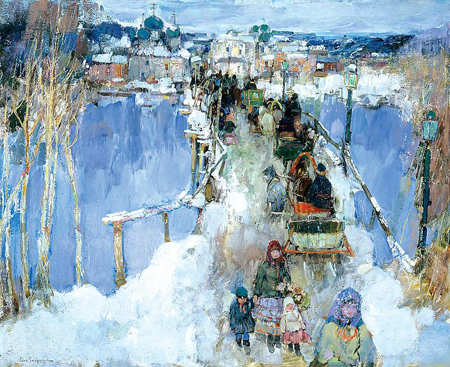 Twentieth century Russian artist Leon Gaspard (1882-1964) needs little introduction. A longtime Taos resident, he painted Impressionistic-like scenes and people with a romanticism that’s fitting for a man who was born Leon Schulman and changed his name in later life to the decidedly more dashing Gaspard.

Born in Vitebsk, Russia, a large city perhaps best known as the hometown of Marc Chagall, Gaspard studied in Paris as a teenager and later painted his way around the world. He captured the landscapes and people of Africa, Serbia and Asia with characteristically lush texture and brilliant color. After sustaining serious injuries in World War I, Gaspard’s doctor recommended the dry climate of the Southwest, and Gaspard made Taos his permanent home in 1918.

"Leon Gaspard: Impressions from Russia and the Faraway" highlights a wide range of works from various stages of the artist’s career. The modestly sized "Forest Sketch in Taos Canyon #2" employs the entirety of the painted surface; from its spindly branched fir trees to its loosely painted rocks and streaky red canyon beyond, the painting is John Marin-esque in its surefooted brushstrokes and breezy affect. "Smolensk - Winter" depicts an ice-blue sky and a snow-covered bridge. Bundled villagers traverse the narrow walkway against a backdrop of dramatic Russian towers — we don’t have to read the painting’s title to know we’re looking at Gaspard’s native land. Lively and colorful, paintings like this one are among his most beloved, and it’s easy to see why. This carefully curated show is worth the visit for both historic and aesthetic reasons.