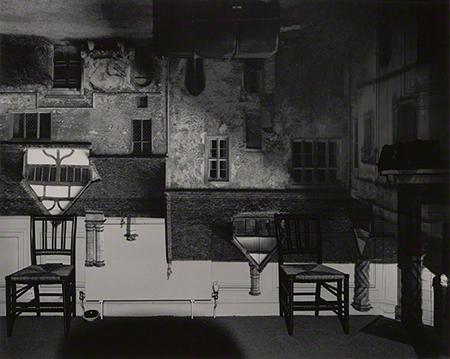 In a survey covering about 30 years titled "The Universe Next Door," Abelardo Morell credits the shift in vantage point that lured him away from street photography and towards intimate domestic settings to the birth of his son Brady. Examining everyday objects from the child’s point of view, sometimes literally down on his knees, ignited Morell’s sense of wonder. Photographs such as “Toy Blocks,” “Paper Bag” and “Ten Sunspots on My Door” attest to Morell’s early ability to employ light and point of view in ways that would continue to entrance viewers as he moved towards more complex experiments with his camera. Born in Cuba, Morell honed his English by reading Hemingway. His interest in the properties embedded in books, maps and other paper objects lead him to re-create the world on his own terms. Morell would cut his profile into the pages of a book, creating a “Paper Self.” He crumpled maps, giving them new dimensions and set an illustration of stars spinning, initiating his own revolution of heavenly bodies.

Morell's fascination with light led him to the Camera Obscura in 1991, when he began to use rooms as cameras. To make these works Morell would darken a room, covering the windows, but leaving a small hole. As light passed through the hole it would create an upside down image of what was outside the window onto the opposite wall. Through long exposures, Morell would photograph the setting, capturing both the room's interior and the image outside. The resulting photographs are enigmatic and disorienting because often the upside down image would fuse with the objects in the room. After experimenting in his home, Morell sought out places with significant views both in the United States and abroad, selecting iconic locations that include the Empire State Building, the Brooklyn Bridge and the Tower Bridge in London.

Morell switched to color and digital formats in the 2000's, which allowed for shorter exposure times and more complicated pictures. Among the most stunning images are photographs taken in Venice, Italy where the intricacies of the architecture co-exist with the decorative interiors. Some of Morell's most intriguing works are his recent "Tent Camera Images," which are, as the title suggests made inside a tent he carries to various locations. Following in the tradition of 19th Century photographers Morell set out to capture the splendor of the landscape. The tent camera has a periscope lens on top which projects what is outside onto the ground inside the tent. Focusing down rather than across or out, the image of the landscape framed by the periscope appears on the ground. From a camera placed inside the tent Morell could record an image that depicted the adjacent landscape superimposed on the much smaller expanses of grass, pavers, sand, or dirt inside the tent. Typically, in a photograph like "Tent Camera Image on Ground: View of Landscape Outside Florence, Italy" (2010) the Tuscan landscape, with its green trees and receding hills, expands out across the horizon. The image of this grand space mixes with the bricks and leaves that are part of the interior environment. Morell's "Tent Camera Images," like his previous Camera Obscura pictures, ask the uninformed viewer to puzzle out how they were created. Figuring out the how, or learning the backstory is as rewarding as looking at the pictures. So now you know