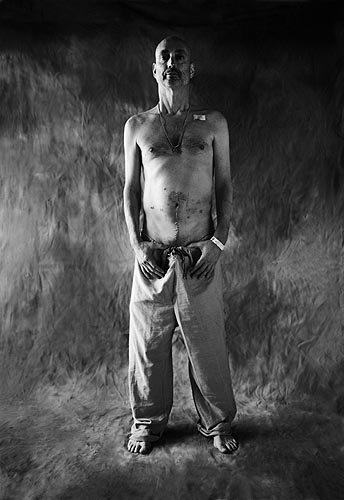 Jim Riswold has a knack for show titles. A quick glance at his exhibition history yields "Göring’s Lunch," "Selling Jesus," "Mao Home and Garden" and now, "Art for Oncologists." Fortunately, the shows themselves tend to live up to their clever titles, and his latest outing is no exception. "Art for Oncologists" is a thoughtfully conceived, immaculately executed departure from Riswold’s previous work, which relied heavily on figurines of dictators and religious figures. The current exhibition is more personal; it’s about his cancer. In 2000 he was diagnosed with leukemia and underwent a brutal regimen of chemotherapy and other treatments, which ultimately forced the disease into remission. But only one year after getting a clean bill of health, the artist learned he had prostate cancer. Complications of a subsequent prostatectomy nearly killed him. Although he is now cancer-free, he has developed interstitial lung disease as a side effect of his medications, many of them toxic.

Despite these travails, Riswold conceived "Art for Oncologists" quite literally as a Valentine to the drugs and doctors he credits with saving his life. The show’s centerpiece, "A Big Bowl of Chemotherapies (and One Zofran)," is a five-foot square “candy dish,” three feet deep, filled with oversized sculptures in the shape of Valentine heart candies. The hearts are made of polyurethane and finished with a glossy coat of white automotive paint and resin. Each is inscribed with the name of a chemotherapy drug: Cytoxan, Methotrexate, Cisplatinum, and other multisyllabic unpronouncables. Each sculpture has also been photographed and made into a white-matted silkscreen, which, along with the white hearts and candy dish lends an antiseptic air and evokes lab coats and sterile operating rooms.  Riswold says he first envisioned the hearts as multicolored, like real Valentine’s candies. Subsequent color tests produced an effect he found “too cartoony.”  He says he decided to limit the pieces — and the lion’s share of this show’s other works — to white monochrome in order to create an atmosphere “that was medicinal, eerie, and beautiful all at once.”

And that is, in fact, how the show feels — perhaps a notch too frosty for an exhibition conceived as an outpouring of celebratory warmth. Still, the few times color does assert itself are all the more striking for their scarcity. In the exaggeratedly vertical photographic print "Mon Ami, Oncomouse," acid-yellow liquid in an IV drip seems to glow from within. And in "Don Quixote Fights Cancer," a lance-wielding figurine of Cervantes’ iconic wildmill-tilter sits astride another IV bag full of impossibly bright, pinkish-red medicine. But there are no figurines or other whimsical props in a nude self-portrait created in the days following Riswold’s prostate surgery. In a brutal but elegant full-length image "Riswold's Owies (Cancer, pt. 1)," he stands in contrapposto, a catheter in his penis, urine bag strapped to his calf, his gaunt body a roadmap of scars, stitches, and staples. It isn’t a pretty sight, but it reminds us of art’s alchemic power to turn suffering into the stuff of wonderment, empathy and hope.