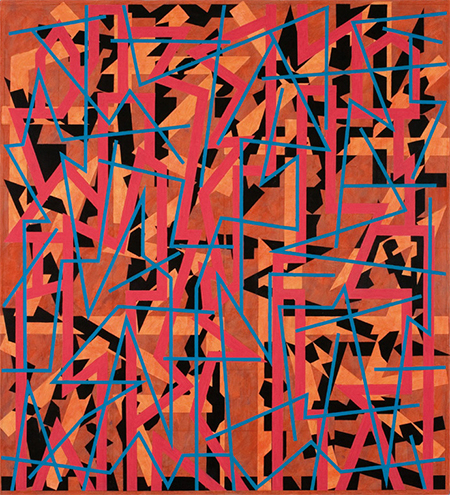 The 1960s-era American collaborative group Anonima - with its focus on optical perception and how the brain engages with distorted geometric images - lasted only a decade, but one of its surviving members, Ed Mieczkowski, has kept its concerns vital through his continued painting and writings. This retrospective includes several gray-scale Op Art pieces on canvas and paper, including “Anon” (1961), with its circles and polygons resembling vertebrae, and “Bin Endotopic” (1965), a study of triangles and lines projecting a 3-D playfulness.

Three angular sculptures made from wood and aluminum, created in the 1980s, add to the mix, while “Red Crane” (1982) sets the tone for Mieczkowski’s more current work. This 6-foot-high canvas draws the viewer into a zigzag tangle of overlapping colored lines, with interruptions of black to add depth and challenge the eye. Additionally, in two complementary canvases, “Op 4 (Red)” and “Op Cross Blue,” (both 2006), the artist’s mathematical precision turns an array of Pac Man-like dots into eye-popping neon crosses.