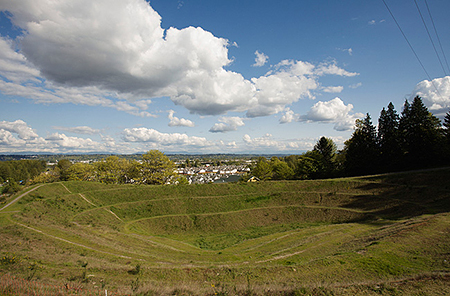 Celebrating the 40th anniversary of the Seattle Arts Commission One Per Cent for Art ordinance (one of the first in the nation), it is worth discussing one phase of the program — modernist sculptures — to make the point how physically and aesthetically durable such works have become. Singling out seven artists who have created two (or more) works within the collection or the region as a whole, visitors to the greater Seattle area can consult a half-dozen public art guidebooks and self-guide a tour attempting to answer the question, “Why not abstract sculpture?” My short answer is, “Because it leaves the interpretation and pleasure up to the viewer and hence is more democratic and appropriate for public art.”

Such a notion complements a statement by one of the artists, Robert Morris, who said in 1979 that whatever else it does, art “does not seek control through explanation.” With over 3,000 works now in the indoor (Portable Works) and outdoor (Art in Public Places) collections, let’s briefly touch on 14 by the modernist seven: Doris Chase; Robert Maki; Robert Morris; Louise Nevelson; Isamu Noguchi; Richard Serra; and George Tsutakawa.

The latter, a student of Archipenko’s at the University of Washington, made “Fountain of Wisdom” (1960), the Japanese-born artist’s (1910-98) first commissioned fountain-sculpture for the new International Style Seattle Public Library. Fifty years on, the stacked bronze ovoid assemblage was repositioned by new library architect Rem Koolhaas at the corner of the building’s sidewalk entry. Tsutakawa went on to create over 60 fountain-sculptures across the country and in Japan.  His second masterpiece in Seattle worth visiting, “Naramore Fountain” (1966), is one of the few examples of an artwork gracing an interstate freeway exit.

Before Chase (1923-2008) became a dance video pioneer in New York, she was an internationally exhibited painter and sculptor in Seattle. “Changing Form” (1969-71) typifies a vista point site, its two punctured, Cor-Ten steel forms looking out at the city’s skyline. Her first large commission, it was joined 30 years later after she returned to Seattle, by “Moon Gates” (1999) at Seattle Center, three vertical see-through rectangles of bronze with interior benches that grew out of the props for dancers in her videos.

Prominent collectors Bagley and Virginia Wright were responsible for either privately commissioning or co-funding a number of the artists discussed here. Their first commission was also Mark DiSuvero’s first. “Bunyon’s Chess” (1965), positioned in the backyard of the family’s Washington Park home, is now resplendent at Seattle Art Museum Olympic Sculpture Park (OSP) overlooking Elliott Bay. Kinetic and industrial looking, its triangular frame of stainless steel is a tour de force of scale and balance, as is the nearby “Schubert Sonata” (1992), a sinewy ribbon of steel on a post that calls out to its 48-year-old sibling.

Noguchi’s (1904-88) “Black Sun” (1968) in front of the Seattle Asian Art Museum in Volunteer Park was the second NEA-purchased outdoor sculpture in the nation and co-funded by SAM founder Richard E. Fuller. Now iconic, the Brazilian black granite doughnut shape is near the park reservoir with the Space Needle and Olympic Mountains in the distance. Poorly sited by comparison, “Landscape of Time” (1975) consists of five orange granite boulders set on a brick entry plaza at the Federal Office Building. It was one of a number of public artworks that were routinely pilloried by daily newspapers and are now generally accepted and admired.

Nevelson’s (1899-1988) “Night Flight I” (1973) contrasts at the airport with Maki’s larger sculpture but still holds its own indoors. Nine painted boxes  include fragments of chairs, crates and a ravioli cutter. Her “Sky Landscape” (1976-83), donated to OSP by the other major Seattle art collectors Jon and Mary Shirley, is quite different, two upright welded-aluminum “figures” (male and female?) on an irregular base; it demonstrates the artist’s underrated power over manipulating space in the round.

Most controversial of all, Morris’ “Untitled (Johnson Pit No. 30, 1979/96),” should be considered as two separate works, first a “cut and fill operation,” to use Morris’ words, that graded and filled in a disused gravel pit and, a second, in its heavily “restored” condition. At the time influenced by Robert Smithson’s theory of entropy, Morris “hoped the [King County Arts Commission] piece would simply deteriorate.” The budget was $80,000. He returned in 1995 to restore and cast in bronze the derelict tree stumps; this time the budget was $98,000 with $10,000 per year allocated for perpetual maintenance. In an about face, he concluded “Untitled” “should last forever.” The view from the rural site has also changed: what were once pumpkin fields are now tracts of suburban homes.

Finally, Serra’s “Wright’s Triangle” (1979-80) at WWU, according to the artist, “went through a period of time when the sculpture was covered with graffiti.” An extension of the better-known “House of Cards” (1969), Serra’s first commission anywhere was soon relocated to better effect and student acceptance. As he told me at the dedication of his OSP work 25 years later, “Wake” (2004), “Virginia and Bagley not only helped me: they invented me!” “Wake” weighs 30 tons and consists of ten interlocking steel plates each 14 feet high. Walking around the five pairs, one contemplates the mastery and mystery of modernist art in public places. With 24-hour closed circuit surveillance, there has been little or no vandalism. Admission to OSP is free and all the other works discussed have easy public accessibility.