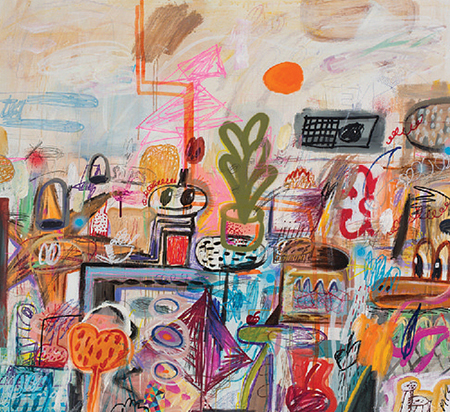 Strongly influenced by graffiti and neo-Expressionism, Michael T. Hensley combines painting, drawing and collage in densely composed works on birch panel.  A few of these, such as "Chuky" and "OLOST," harken to the earth-toned palette he has deployed in previous bodies of work, but the majority of the current pieces stake out more vivid chromatic territory.  "The Orchard" plays an etude on rose, fucsia and red, while mini-rainbows in "Flotsam" jostle against a purple flower and stylized waves in an array of bright blues.

Hensley is eclectic in the child-like imagery he favors, filling picture planes with stick figures, animal/human hybrids, plants, geometric shapes, mountains and an armada of other diverse motifs. He often counterbalances spray paint and graphite with markers and crayons, lending an overall maximalist impact. This strategy evokes a kind of decadent elegance in works such as "Enough Nuts," but falls short of cohesion in "Hot Dog Moth," riotous scribbles whose slapdash quality is at odds with itself. Across the totality of the exhibition, Hensley proves himself a deft visual thinker working in a feverish, streetwise idiom.