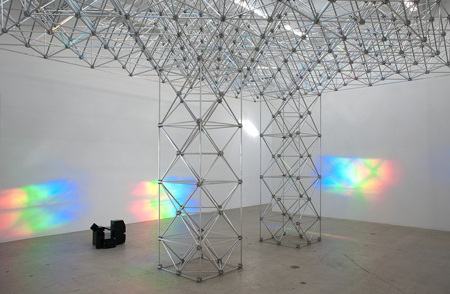 Mark Hagen works equally in painting and sculpture, and both are rooted in his own version of a post-minimalist alchemy.  He frequently employs obsidian, a mainly black volcanic glass, into his floor and wall works, but here his works in aluminum and stainless steel frame constructions take center stage. The large gallery is dominated by "The Alhambra," in which an Erector Set-like sequence of conjoining sections rise from a modest foundation into an expansive 'roof' that encroaches the ceiling. The effect is a vaguely genuflecting experience that, more literally than his other work, alludes to the mathematical (belief) system that underlies his oeuvre.

A trio of smaller aluminum-and-stainless-steel towers, dubbed "Ramada" (1, 2, and 3), have their joints periodically capped with the pulp of paper taken from the Y2K Survival Handbook and Truckin' magazines from the early '90s. They strike a surprising dose of humor in what has otherwise been a humorless gestalt (though the show's title, "Paleo Diet," is awfully clever). Hagen's paintings have evolved from a hard-edged geometry to a series of "Gradient" paintings, in which some of his familiar geometric forms are visible close up, but from a distance read as black and white gradient transitions. It's a strategy that fuses approaches as disparate as those of Julian Hoeber and Cory Arcangel. Make no mistake, though: this will be one of the stand-out shows of the season.