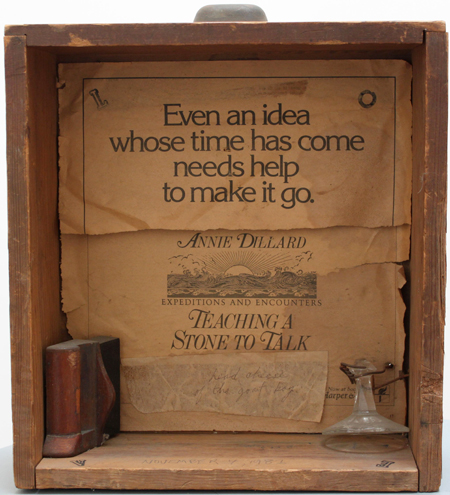 "Sarcasm has no place in literature," the noted writer Annie Dillard has said, "but irony has the highest place." Perhaps that has some application to the visual arts, as well, for what I like most about the work of George Herms is his sly humor and irony – combined with clever use of objects from our throwaway society as his raw material. Maybe what is annoying about sarcasm is its implied bitterness and self-importance, two unattractive characteristics which Herms avoids handily.

I bring up Dillard in this review since one of the most striking works among some 20 in Herms' current show, titled “On and Off the Wall,” is “Teaching a Stone to Talk for Annie (Dillard)” from 1982. The frontispiece to the book, with Dillard’s name and the book title, is inset into a box – a small, beat-up wooden drawer CK which is just the right size for a page. Over the upper half of that yellowed page is another yellowed page, which displays the words, “Even an idea whose time has come needs help to make it go.” I don’t know if those are Dillard’s words, but Herms must have had a good chuckle over that line - it’s so in synch with the sense of age and entropy pervasive in his works. His found objects don’t have the sepia-tinged romance of “vintage.” Instead they have torn edges, are yellowed, broken and bent. Two small objects sit in the lower corners of the “frame” in "Teaching a Stone" – on the left, a fragment from a piece of furniture; on the right, the stem of a drinking glass CK, held to the back by rusty wires, twisted together in the front.

Herms is the granddaddy of assemblage and found art in California, his earliest works dating from the late 1950s. He finds humor and poetry from the detritus of our times, and from the juxtaposition thereof. This show puts together a number of works from the 1980s, as well as an early one from 1964 (“Geographic”) and several from 2011-12. Some of his works are attached to old boards, but I’ve always liked how he often uses found objects as framing devices, as is the case with many pieces here. As mentioned, “Teaching a Stone” is set into an old drawer, a natural “frame.”

The centerpiece of “Stanley” (1986) is a small case, the ones that may have held a set of dessert spoons or forks, with both halves opened as display surface for miscellaneous objects; and that case in turn is mounted on a water-stained board. The background of “Untitled (Valuable Dung)” (1988) is a newspaper cut into the shape of an arched window. Mounted to the upper section is a circular shape, and to the lower half, a box with a glass pane inset CK. The circle frames a torn-out newspaper article with the headline “Fire in Cave Imperils Historically Valuable Dung of Extinct Sloth” – a pretty hilarious chain of words stinging with someone’s reality (some paleontologists would have been very upset by this news). In the box below is a rough cut-out of a circle with a crumpled piece. The box itself is so decrepit that the paint has blistered, revealing a mottled orange underlayer, quite beautiful in itself.

There has always been a roughhewn aesthetic inherent to Herms' art, considering the materials he uses. But on occasion a work simply looks unfinished, just the beginning of inspiration in arranging the assembled materials. This seems especially so for several works that have wire or springs attached and are undated. “Lovers,” for example, consists of two springs hung in an “x” over scraps of paper, on a battered piece of board, although, as I write those words, I realize that some people will find the assemblage an apt metaphor for lovers lost or past.