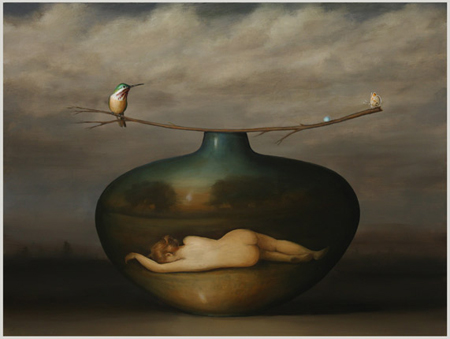 Considered among the most notable contemporary still life painters, 57-year-old David Kroll has built an impressive track record since his New York debut in 1992 and gained critical acclaim in Chicago and elsewhere. His ninth solo show in Seattle underscores his strengths without really breaking any new ground.

The signature Kroll painting now combines birds, fruits and vegetables, eggs, and antique china set before sunny or turbulent skies in a darkened landscape. The Seattle show offers 14 of these with another four oils that are different and surprisingly problematic. Literally fish out of water, the latter depict swarming and swimming Japanese koi fish against black backgrounds. Neither realism nor surrealism, these works strike a jarring note and are hard to reconcile with the gravity and thoughtful symbolism of the other paintings.

Layers of cultural richness inform the still lifes. China collectors and decorative arts curators are not the only viewers who will smile at the references to antique Chinese, Persian, Japanese and 19th-century American porcelains such as Rookwood and Weller. Originally from the Midwest, Kroll, who moved to Seattle over a decade ago, places an egret, a bird that became endangered a century ago due to the demands of women’s fashion designers for its feathers, in “Egret and Bowl.”

A graduate of the Art Institute of Chicago and San Francisco Art Institute, Kroll’s technical skills are impeccable. Except for the fish out of water, he can make us believe that anything he paints is real. Over and over, birds are linked to priceless porcelains, or Japanese imari ware in the case of “Egret and Bowl.” In “Crow,” the bird perches near a Rookwood scenic vase, creating a landscape within a landscape. In “Hummingbird and Butterfly,” among the more complicated compositions, a nude reclines on the side of another, fatter pot. The cloudy sky may foretell the demise or endangerment of both creatures. Until then, each vignette captures a moment of natural grace, only mitigated by the manmade presence of the objets d’art.

Kroll toys with the china collector all the same, challenging him or her to accept that the decoration is “correct” in “Bowl with Two Birds.” It is not: the bowl is inverted yet the decoration, a house, reads right-side up. With relief, the viewer defers to the artist’s creative control, shoving us farther away from realism, but, thankfully, steering clear of full-blown surrealism.

Symbols are one thing; critics have commented on Kroll’s affinities to 17th-century Dutch still life vanitas paintings, as in “Books and Eggs,” a tipsy stack of untitled bound books guarded by a bird and six eggs. Knowledge and nature co-exist uneasily in the world.

More ambitiously, an entire literary allegory or narrative could be imputed from “Books and Small Globe.” An antique world globe proudly sits amid the bird’s nest and another stack of books. Could this be a comment on the end of American (or any) empire, shrunken to a desktop ornament? Dusty books suggest obsolete knowledge and beliefs that led to the imperial arrogance of 19th-century England and the US. And the bird nest? Symbol of the origin of life and populations controlled and endangered by empire? Or icon for the fragility and necessity of nature?

The koi paintings have vases and bowls, too, but the logic of the fish and porcelains doesn’t mesh, except in “Koi and Blue Vase.” Besides the swimming fish surrounding it, two koi decorate the blue vase, another image within an image.

Everything here is smaller than in Kroll’s last show. Ask to see “Landscape with Bowl and Birds” (2005) in the back room. Instead of 16 to 28 inches, its larger, 3 by 5 foot size accommodates more still life elements: pearls, birds, grapes and flowers. More showy to be sure, but without the density and compression of the new work, one appreciates the distance Kroll has covered.