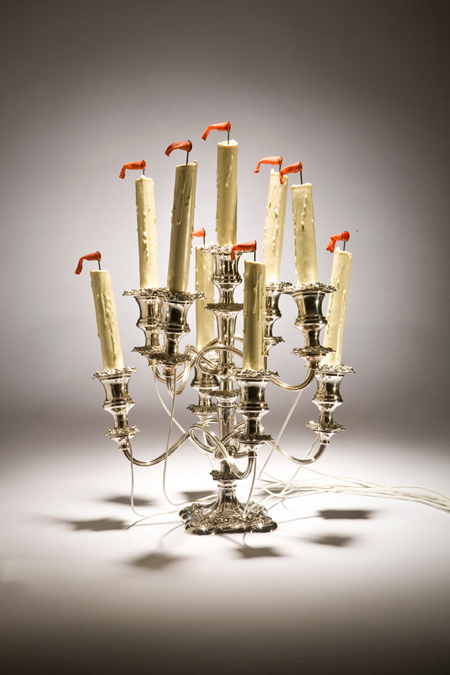 In "Displacements" Joseph Kohnke brings life to inanimate objects. His low-tech DIY aesthetic imbues the sculptures with a subtle charm. The works turn on when a viewer walks by sensors that trigger motions that range from slight undulations to droning sounds that envelope the space. The works explore the relationship between people and machines, and touch on personal as well as universal subjects. While many of Kohnke's sculptures use motors to perform simple tasks, in some these movements suggest something more sinister.

The framed thrift-store painting of ships in "At Sea" is connected to a sophisticated brass-colored mechanism of pulleys and levers that controls the rocking motion of both painting and frame. The motion of the frame is sometimes in synch and sometimes in contrast to the ebb and flow of the painted water. "Windbags" is a modified silver candelabra with plastic candles and miniature orange windsocks that flutter as if they were flames. Taking full advantage of the double meaning of its title, the work references not only the fact that the little windsocks are full of hot air but also that candelabras are outdated symbols of wealth.

In "Smart and Final" Kohnke choreographs the drilling motion of numerous tiny oil rigs created from plastic utensils. These intricate works fashioned from throw-away products (available at places like Smart and Final) sit all over a wooden picnic table and benches that they mine indefinitely, metaphorically destroying the place where they might have been in use. Destruction is also inferred in "Launch," in which a dozen old-fashioned black lunch boxes spread across the floor, mechanically opening to reveal the multicolored thermoses within. Attached to each lunchbox is a tiny orange windsock that fills and deflates as the thermoses rise and fall. The thermoses, sheathed in lunch box silos suggest missiles ready to launch.

Kohnke's sculptures are both nostalgic and forward thinking. While he breathes new life into everyday objects he also succeeds in making rote mechanization poetic. As antennae rise and fall from an old RCA Victor TV in "Out of Touch" it is impossible not to imagine the black and white image that once filled the screen, as well as the obsolescence of those quaint antennae, in the digital age. By using found materials that harken back to another time - black lunch boxes, candelabras, or the 1950s era boy mannequins in "Absorbed" (whose fascination with a toy train literally embodies them) - Kohnke makes reference to a time when things were simpler while simultaneously acknowledging the role technology plays in his practice and in today's world.