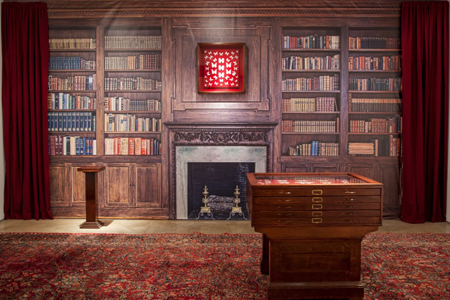 Beginning with the Renaissance and continuing through the Age of Enlightenment, interest in collecting, cataloguing, and presenting all manner of objects grew increasingly popular. The resulting microcosms of the world, sometimes known as a “cabinets of wonder” or “wonder rooms,” have come to be seen as symbolic representations of the collector’s attempted control over the world. Michael Crowder transforms an art gallery from a white rectangular box into one of these cabinets of wonders (cabinet in this context meaning “room”). His mini-retrospective, "Retro-spectacle," presents works dating back to 2006. Sculptural pieces, including box constructions with cast-glass objects and other materials, both hang on the wall and rest on the floor.

Three pieces at the front of the gallery share the title “A Sense of History Reprised,” but each one has an additional parenthetical name. All are composed of cast glass using a variation on the ancient pâte de verre technique. “Oval Painting” is a small oval frame surrounding an opaque white center. “Large Painting” and “Small Painting” are similar, placing emphasis on the details of the frames themselves rather than the “paintings” they surround, which are simple, white grounds of textured glass. One is struck by the beauty and fragility of the glass.

“Body of Work: Part 2” is a dark wooden cabinet with shelves below and a glass cabinet above. The shelves hold actual tools laid out in rows, while the top contains three objects — in addition to an actual knife, there are two cast objects, one of lead and one of glass with a lead appliqué. The latter has an appendage that references the male anatomy, while the former is its female counterpart, hence the title “body of work.” The phrase serves to describe the subject matter of the piece, as well as the artist’s creative output.

In addition to a dozen individual sculptures, Crowder's show includes a room-size installation titled "Mariposa mori," which also references the cabinets of wonder. The back third of the main gallery is partitioned off, and a pair of red-velvet curtains are drawn apart to reveal a “cabinet of curiosities.” The back wall is covered with a billboard-sized reproduction of a library, complete with fireplace, and on the floor is a large oriental rug. On the walls and floor are dozens of cast-glass butterflies presented specimen-like in protective wooden cases.

Crowder constructs the dark mahogany cases himself using pieces of antique furniture. The largest piece, located in the center of the room, was fabricated by placing an antique wooden flat file atop a wooden base that once was part of a table. The top of the fabricated piece is glass, revealing another dozen or so of Crowder’s signature translucent butterflies presented against a red felt background. When one pulls out the other four drawers, they too are filled with the fragile cast-glass butterflies. “Mariposa mori” explores both contemporary and historical museum practices by presenting the work as though it were in a museum context. As an experienced museum preparator, Crowder draws on a world with which he is familiar, reimagining and transforming it into a self-referential work of art.

In other constructions, Crowder manipulates such diverse materials as lead, porcelain enamel on steel, cast lead crystal, cast bronze, Plexiglas, ink on silk, mulberry paper, photographs and found objects. Most are wall-mounted at eye level, inviting the viewer to peer into the small worlds that Crowder has created. “Machina Respirato” has a kinetic component as well, presenting a found bellows in an elaborate shadow box where a convoluted system of visible cast-glass pulleys and motor make it appear to inhale and exhale every 10 seconds.

In these exquisitely executed constructions, Crowder addresses the impermanence of objects and the fragile, fleeting nature of life. In the words of the artist, “These dark mahogany cabinets ground the exhibition in another time and place and create an environment that allows the viewer to experience the butterflies simultaneously as art object and as historical relic — an 'art/ifact.'” Like those collectors in the Age of Enlightenment, we view the “cabinet of curiosities” that Crowder has created with a comparable sense of wonder.