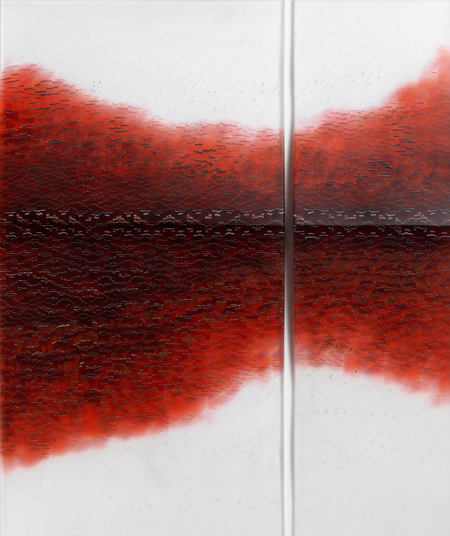 Whereas ceramic pottery and sculpture dominated West Coast craft art from the days of Peter Voulkos in California; Rudy Autio in Montana; and Robert Sperry in Washington state, Dale Chihuly’s co-founding of the Pilchuck Glass School in Stanwood, Washington in 1971 changed everything. Within the decade, art made of glass, often in the Northwest, but across the nation and beyond, rose to the top of the craft heap in a tolerant art world. A mixture of technical breakthroughs and individual talents led to substantially higher art-market price points that neither Voulkos nor Robert Arneson attained during their lifetimes for their work in clay.

Glass-world figures like Chihuly and, as seen in “Links: Australian Glass and the Pacific Northwest,” Dante Marioni, Lino Tagliapietra, Richard Marquis and Klaus Moje, all developed ties to Australia either through Pilchuck summer sessions or tours abroad. The differences between Pilchuck glass and Australian glass revolve around glassblowing vs. kiln-casting and forming, the latter two more predominant in the Commonwealth nation. This actually parallels a division within postwar US ceramics as well, i.e., throwing vs. mold-making, the latter, like kiln-casting, offering greater sculptural possibilities.

Bright color, due to Venetian influences and Italian glassblowing technology transfers occurring at Pilchuck, joined greater scale to push Chihuly over the top, along with many of his American cohorts. Monochrome or minimal color, suppressed in favor of plastic form and volume, generally characterize Australian glass. Cold-working techniques (executed after the kiln or blowpipe) such as engraving or chipping (battuto in Italian) also play important roles. In addition, although Pilchuck and, by extension American, studio glass gave women artists and technicians ample opportunities in a macho studio setting, women seem to have done especially well in Australia.

Presented in a somber, dark-walled but well-lit and well-designed installation, viewers are able to trace the links from Venice to Seattle to Sydney, Melbourne and Adelaide. Chalice and goblet-maker Dante Marioni toured Australia over ten times and planted a firm and virtuosic skill set. Ultra-traditional blowing techniques were lifted and emulated by Nick Mount, Clare Belfrage and Tom Moore. Marquis’s sojourns had comparable impact. With Moje moving to New South Wales in 1982 to found the Canberra School of Art Glass Workshop, several generations were set in motion, those who dominate Australian glass today.

Of these, Richard Whiteley, Kirstie Rea, Jane Bruce, Steve Klein, Giles Bettison, Mel George and Jessica Loughlin all express abstract imagery in pale, cool colors, perhaps also an indirect influence of British and Danish glass. Moje’s other ties were to Bullseye Glass in Portland, Oregon. Those exchanges and residencies gave way to a strong presence of examples that combined fusing and blowing, another breakthrough, allowing for intricate surface patterning and greater, flatter surfaces. Nadège Desgenétez, originally from France via Seattle, moved to Australia to teach, too. Her horizontally striped leggings or chaussettes are a good example of fusing and blowing combined.

Without as much of the instant eye candy that catapulted Chihuly and the Pilchuck School artists to wide acclaim and accessibility, what is there to appreciate in Australian glass? There seem just as many individual talents despite shared familiar processes. Fewer have crossed the art/craft divide to show in fine art galleries, but many have somehow developed international careers. Without a significant collector community, the Australian government has stepped in repeatedly with a complex set of grants and fellowships; indeed, a variety of government entities form the majority of underwriters for the Tacoma exhibition. Another backer, Bullseye Glass, is also represented by an essay specifically on its role in the cultural interchange. Other essays go into Australian cultural background and related issues.

Among the youngest artists, Mel Douglas, Mel George, Brenden Scott French, Jeremy Lepisto and Janice Vitkovsky stand out for their simple and subtle adaptations of Moje’s ideas, similar to the way that so much US glass flows out of Chihuly’s example and leadership.

In contrast to the mainstream West Coast glass — blowing, bright colors, vessel-oriented — Australian glass may appear less exuberant or showy, but its strengths — clarity, simplicity, and the importance of line — garner it a place on the world stage that can only grow more significant. This exhibition is a good start for North American viewers.