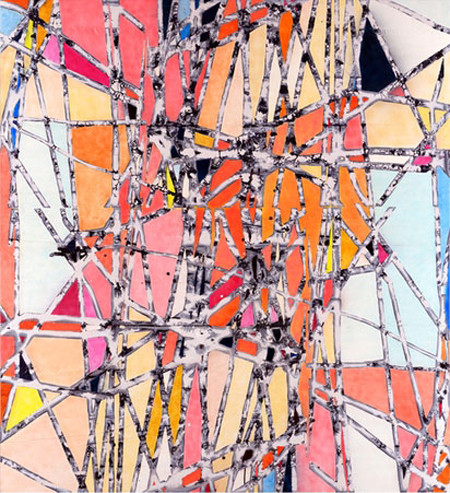 A painter's evolution from representation to abstraction can form an intriguing path, particularly for its degree of departure. Do we perceive, in their leaving the crutch of recognizable figures or grounds, a notable maturation, a perception due in large part to one of our built-in preconceptions, an artifact of early modernism? Jackson Pollock made paintings in the Thomas Hart Benton school before eventually becoming the master of drips; there was no way that the shift to his ultimate oeuvre wouldn't be a drastic one. On the West Coast, Richard Diebenkorn's path was more gradual, with landscapes interpretable even within his later, most abstract era. And then there's the reverse course, leaving abstraction behind for representational imagery, the most notorious example being Philip Guston, whose move from mainline Abstract Expressionism to his singular caricature/cartoonish — if reductive and austere — imagery caused a sensation at the time.

With the breakdown and dispersal of schools and the disappearance of totalitarian-like dogmas of Greenberg et al., it's hardly uncommon for artists of recent vintage to vacillate between abstraction and representation, the most notable and still ever-present model being that of Gerhard Richter, who has managed to convincingly link the disparities arguably more than anyone via his squeegeed abstractions and hazy realism. Meanwhile, his contemporary and countryman, Sigmar Polke, was something of a master at merging the two approaches — as opposed to carrying on parallel paths — exemplifying such a vigorous spirit of experimentation and invention that his influence rivals that of Richter's.

Swiss-born, New York-based Arnold Helbling has flirted with abstraction, representation, and at times both together, one merging into the other. This exhibition will bookend the last decade with two different versions of his abstraction: a gestural, strategically blotchy sort from the early- to mid-2000s, along with his most recent "Architectonics" series, from this year. The latter work is characterized by webs of black and/or white bamboo-shaped lines; the interior webbings either left unpainted so as to leave the white of the background, or the background filled in with colors, typically oranges, pinks and yellows. In many instances, the design is not unlike a stained-glass effect, and is reminiscent of Christopher Russell's densely lined, stained-glass color-filled webs employed in a photo from his 2007 "Together" series.

Helbling's "Architectonics," despite the series' non-objectivity, carries an essence of something photographic, if not representational. Indeed, in 2008 Helbling was paired with darkroom/process-based photographer Marco Breuer (who recently had his own mini-retrospective at the same gallery) at Von Lintel Gallery in New York, a match borne out of their respective post-photo processes. The "Architectonics" can be seen as analogous to Richter's trademark late abstractions, both bearing a vibrancy and intensity, yet simultaneously a certain remote calculatedness even — painterly without the angst. Whereas Richter's tool is the squeegee, Helbling's is plastic, specifically, plastic sheets that are loaded up and then transferred onto canvas or mylar. This once-removed element provides the aforementioned pseudo-photographic effect.  Drips in the form of skeins or subtle smudges populate branches in a controlled form of painter handling.

In Helbling’s show last year at C & H art space in Amsterdam, he exhibited a series of paintings ranging from quite realistic to near fully abstract that were inspired by Drop City, the Colorado artist commune of the mid- to late-60s that featured architecturally low-fi geodesic dome structures influenced by Buckminster Fuller. Helbling turned to Christiania, the autonomous “Freetown” in Copenhagen, for his own architectural sources, leading to imagery that is brightly light-filled but also what I can only describe as a little ‘dirty,’ thanks to various painterly applications that very effectively conjure a commune’s aesthetic gestalt. The geodesic lines and forms are clearly at least one precursor to the "Architectonics" series, but so too are the tree branches that also made frequent appearances in "Drop City."

In older work from roughly a decade ago, buildings and structures often intermingled with passages of paint; with "Architectonics" there’s been a reduction down to branches of greater and lesser degrees of literalness, like somewhat 'dirty' (here’s that word again) stained glass. Helbling may have left representation for the moment; but even at his most abstract, some form of reference, if not clear, is present, even in its absence. It will be interesting to see if, in the future, that absence becomes more or less pronounced, or, like Polke, he continues to mine the gap.