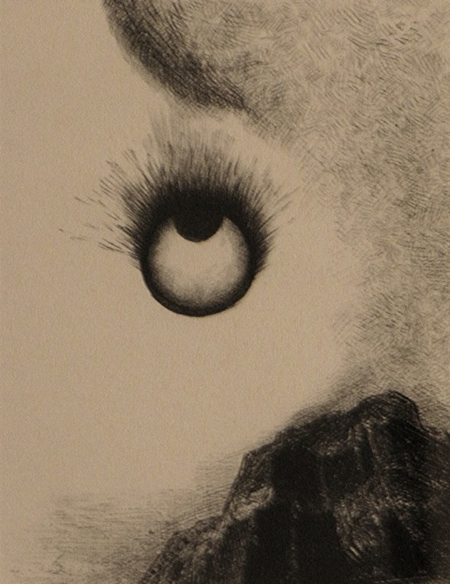 Odilon Redon, ''On all sides, eyeballs blaze'' (detail), Plate 9 of ''The Temptation of Saint Anthony,'' 1888, lithograph. Courtesy of the Detroit Institute of the Arts.

The darkly mysterious charcoal drawings of the French Symbolist Odilon Redon, which he called his noirs, were effusively praised by the novelist Joris-Karl Huysmans, and may thus symbolize the decadent 1890s as much as the plays and life of Oscar Wilde. But does their poetic spell still survive in the digitally enhanced 21st century? Such is the question posed by this wonderful exhibition of three albums of Redon's lithographs, from 1888, 1889 and 1896 (the second is from the Cantor’s collection; the first and third, on loan), based on Gustave Flaubert’s 1874 novel, "The Temptation of Saint Anthony." That über-Romantic work details the demon-haunted dark night of the soul of the fourth-century Egyptian hermit and monk — a subject amenable to the freakish imaginings of Bosch, Schongauer and Ernst, as well as Redon. (In Bosch’s time, the fifteenth century, outbreaks of hallucinations caused by ergotism, a rye fungus, were labeled St. Anthony’s Fire, and their victims ministered to by the order of Antonite monks.)

That’s a daunting back story, but viewers who spend time with the works will find the melancholy magic of Redon’s “ambiguous world of the undetermined” undiminished. The smoky blacks (which Redon believed to be “intellectual” rather than sensual) that inspired Joris-Karl Huysmans’ accolades are just as suggestive in the lithographs presented here. The hybrid creatures that derive from the artist’s studies of nature (including microscopic flora and fauna) are, by turns, weird, terrifying, and amusing — but always logical and convincing: reality-based. It is one of the ironies of culture that Redon, who died in 1916, never had the chance to interpret Kafka’s world of “anxious timidity, submission and apprehension attentive to the secret indications of the ideal,” words that Redon wrote about a colleague, but conceded were applicable to his phantoms, or eidola (singular, eidolon; what’s in a name, or near-homonym?).