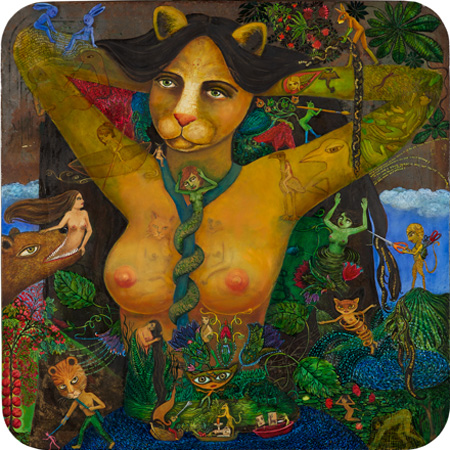 Now that we collectively refer to global warming as “climate change,” it’s become a much less troublesome public issue — the climate has always changed, after all. For environmental activists, however, especially those with keen artistic chops, there’s nothing comforting about a little public appeasement wordplay. Irene Hardwicke Olivieri may or may not consider herself a dyed-in-the-wool environmental activist, but her art is absolute in its reverence for nature and concern for man’s imprint upon it.

Olivieri draws from what she knows — a life that began on the banks of the Rio Grande, that moved through Brazilian rainforests and finally settled into the wilderness of Oregon — and she is at once surreal interpreter, ecologist, anthropologist and sage. The work itself, often painted on wood, is narrative and mythological, yet these are not stories of gods or goddesses, but rather of the rulers of the land, the creatures that sustain it, and therefore us.

In “Breakfast in the Forest” most of the paintings contain images of the artist. "Lamp unto my feet" is exceptionally elaborate in its symbolism and narrative, with Olivieri’s nude body used as a monument, or perhaps temple, in need of renovation. Caged in by scaffolding, her towering figure is adorned with visions of landscape and sky, but is not so much repaired by tiny creatures as it is decorated, save for the little black cats and rabbits that scoop sundries out of her brain. Lanterns light up the night for the critters that bring her fireflies, flowers and fruits full of vitality and creativity. They are feeding her soul — not with the human slickness of sophistication or technology, but with the secret spells and remedies known only by bugs and beasts.

Transformation is a key theme in Olivieri’s work, and if nature is the model, all forms of rebirth and re-emergence are expected and celebrated, no matter what form they might take. This is abundantly true in "Coaxing a better me," in which the artist is in the midst of turning feline. The furry facial features are a bit heavy handed, but exploration of the activity surrounding the figure reveals messages that ring true, such as the false presumption of man’s superior place in the animal kingdom when it’s the rabbits, cats and birds who frolic about and seem to be so much more at home in the natural world.

Likewise, "Rising above resistance" taps into the courage needed for true growth. Olivieri’s doppelganger again stands center stage, this time mired, thigh deep, in the murky slime of a pond filled with skeletons, devils and serpents toting paintbrushes. Above her waist, she is surrounded by lily pads as the light of day and invention celebrate her arrival and transcendence of the darkness. Now connected with her own truth, she becomes one with nature, sprouting fruit-bearing trees from her chest and a halo of branches around her head that lifts her toward the sun.

These are visions of nature as nexus between man and divinity, and any spirituality found within Olivieri’s work is clearly derived not from notions of religion per se, but from unspoiled nature and an animal kingdom that is indispensible. There’s also an intense appreciation for the creative functions and cycles of nature throughout the artist's "Paleo Girls" series. The prehistoric styled pictograms are actually composed of tiny animal bones regurgitated by forest owls. Unable to digest various parts of their prey, the birds expel the remains in the form of pellets. Olivieri then salvages these hairy, toothy, mutant balls, plucks the bones from within (usually with the help of her farm of carnivorous beetles) and arranges them into portraits. It’s freaky, yes, but freaky cool, and just one more way this unusual artist makes a habit of shattering your comfy belief system.