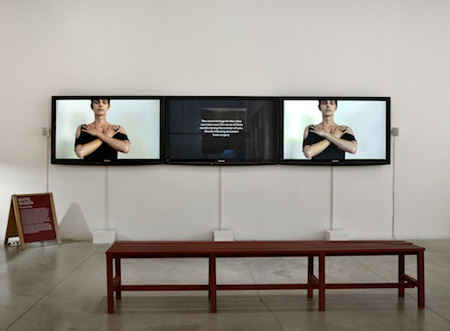 Beatriz da Costa, ''Dying for the Other,'' 2011, installation detail at the Laguna Art Museum.

Artists make art out of their experience of the world. When their world becomes a battleground with a disease like cancer, instead of dealing privately with that issue some choose to make art from within that war.  It can be a daunting fight for survival to witness. It certainly was in Hannah Wilke’s posthumously published “Intra-Venus” photographic series of stills and videos which documented her physical deterioration due to blood cancer. That series revisited her changing body as the still significant site of critique regarding cultural projections about female vanity, beauty and narcissism.

Beatriz da Costa’s video installation “Dying for the Other,” however, is notably different. Rather than cultural critique, de Costa’s last artwork is asking us to consider equally penetrating questions about humanity’s power to determine worth. Interested in the ways art intersects with things like bio-engineering, robotics, techno-science, and ethics she made this last video while unsuccessfully battling breast cancer. It documents the therapy and changes to her body but also broadens the focus of her battle to engage unspoken moral questions surrounding her treatment. She does that by including footage of the lab where her cancer cells were repeatedly being cultured, as well as the lab rats that died as part of her medical treatment.

By including the rat’s weirdly hairless, pale, almost fetal looking bodies in her narrative of survival, da Costa raises some charged and highly emotional questions. Clearly she wants to survive and is working fiercely to do that. But repeatedly, against her regimen of treatment and suffering, we see the linked lives of the test animals that are injected with materials from her system. Gradually this becomes an absorbing examination of mutual fragilities - as she gets weaker their thin skin and baldness mirrors hers. Tiny autopsies on their medically induced tumors shock us, but also connect us to her body’s hard reality. That physical connection between her body and the creatures specifically bred for this kind of sacrifice leads us to consider a range of conflicting feelings. As she walks unsteadily down hallways we follow, feeling our way between grim determination and guilt, endurance, grief and resignation. Those are undoubtedly the feelings that accompany anyone in pain who suffers and ultimately faces death. De Costa’s work, however, makes us at least wonder if perhaps that’s not also true for other living organisms. Troubling as that is to think about.