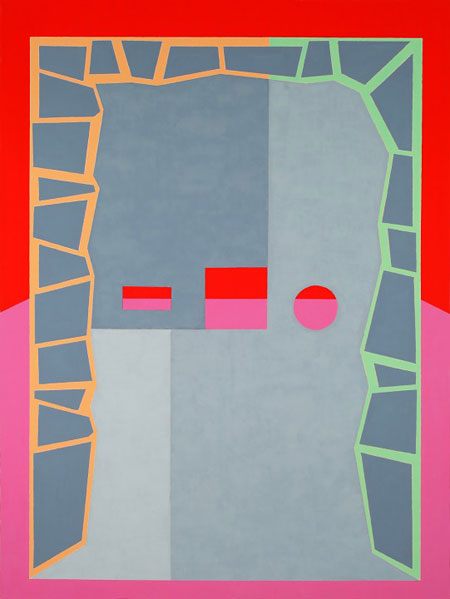 For his Seattle solo gallery debut, 57-year-old Michael Ottersen simultaneously raises the expectations of his admirers and lets them down. Ottersen has been a fixture here since he relocated from New Mexico in 1997 after 13 years in New York City. Almost an artist’s artist, Ottersen made a radical shift from his figurative East Village days to severe yet sensitively painted geometric abstractions.

His recent paintings are much smaller than Ottersen’s biggest Seattle abstractions and a disappointment by comparison. Still, each carries an intimate, mysterious power. Color is an important driver of these works but in unusual ways: off-tones that never sweeten into decoration; blocks that are divided by thick to razor-thin colored lines; and vibrating juxtapositions of hues and shades that whisper rather than jangle.

“Mary Krishna,” “Under Neptune” and “Bangs” play off a man’s head either set in relief by respectively red and orange areas; blue, black and gray slabs; or schematic divisions of facial features in a tour de force of grays and faintly colored circles. With the barely noticeable male head, one might call Ottersen’s style closeted abstraction. The male image is there, but cosseted and concealed by a loving and thoughtful paint application. Inch by inch, each area of every canvas is given equal, somewhat obsessive, attention.

“The Sailor, the Carpet, the Drapes” mixes subtly graduated layers of pink with thin gray lines seeping through. Also diminutive, “Carpeted Stairs” and “Definite Article” are compositions of rectangles and squares within squares that are complicated by careful subdivision of colors that balance purple, gray and white or, as in the latter, green, pink and yellow spots.

Even with bright color, the overall mood is somber and smoothly impastoed. Ottersen is re-internalizing abstraction, returning it to its subjectively mystical Suprematist origins without any need for pop culture references or tiresome social allusions. Like game-board patterns or puzzles, the 14 oil paintings and ink drawings are not that welcoming, but coolly invite contemplation and inquiry.