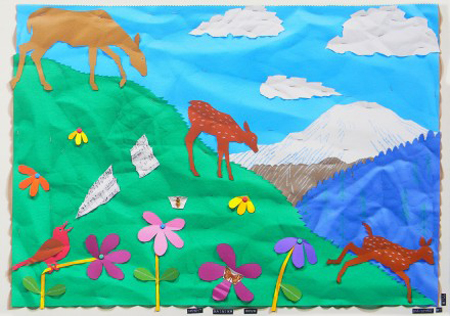 For his third Seattle solo show since 2011, Bill Braun displayed an unusually large number of trompe l’oeil paintings. Working in the same vein for nearly 30 years, Braun’s new work takes his airbrush virtuosity for granted to subtly introduce nature, ecology, leisure and endangered plant and animal species as subjects. Newcomers are hypnotized initially; then stupefied with wonder; and finally astonished by the works' quiet beauty. For more long-term admirers, Braun follows 19th-century American faux realists William Harnett and John Frederick Peto and, like them, mixes landscapes and still lifes to draw attention to bigger issues. Mortality and the vanity of life were the Victorians’ allegorical messages; for Braun, any moralizing is soft and tender, like his comic “Whooo” and “Spotted Owl,” or more ambitious scenes such as “Forest Life” and “Lighthouse Beach.” The fragility of nature is like the pieces of torn paper that seem to make up each work.

“Mount Rainier Song” is a tribute to Hicks’ “Peaceable Kingdom” folk art masterpiece: deer, horses and birds all inhabit a domestic farmyard. “Lookout” has a grizzly bear gazing down on cleverly penciled-in boulders. Such textures and patterns are completely contrived. First taken as an outsider artist, Braun quickly persuaded viewers — and critics — of more complex meanings. However, everything is executed with a uniform tone and smoothly distributed light, resulting in completely even harmonies. Airtight yet airy, their trite illusionism is saved time and again by delayed conceits, concepts and potential stories.