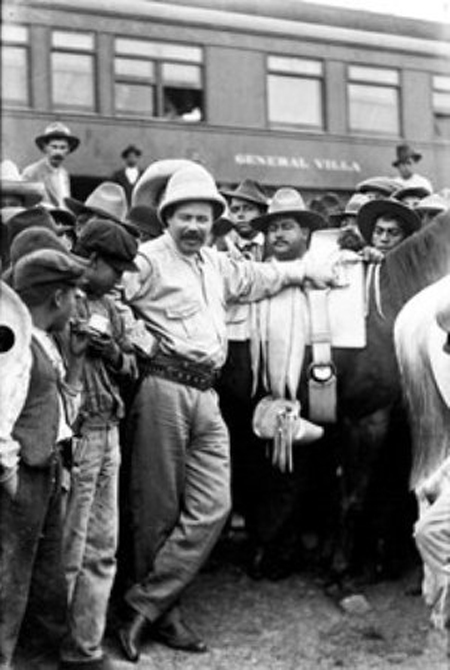 Portrait photographer Sabino Osuna’s dramatic images of the Mexican Revolution, and of the battle’s many heroes and villains, remained obscure for several decades until they were bought by a private collector and then acquired by UC Riverside’s libraries in 1986. With the aid of fundraising and a dedicated staff, the original 427 glass negatives were developed into startling, often cinematic images, which have been lightly Photoshopped to bring out their clarity. While the entire cache of pictures, shot between 1910 and 1918, was incorporated into a book, “Mexico at the Hour of Combat,” 46 of these negatives were developed into 17 by 22 inch and larger images for this exhibition of the same name. Photos of this first major revolution of the 20th century include candid and formal pictures of generals, presidents and other statesmen, battle scenes, both real and staged for the camera, destroyed buildings with curious onlookers, soldiers resting between battles, the devastation of war.

Among the most familiar images are those of “Pancho Villa,” the photogenic, revolutionary supporter of the future President Francisco Madera. There is one of Villa standing on a train, in another he talks casually with supporters. Portraits of generals, including “General Guadalupe Narváez” and “Zapatista commander El Tuerto Morales and his aide” depict stately sombrero-clad men with waxed mustaches; these are so carefully posed that they appear like movie stills. Here also are revealing portraits and candid shots of desperate but fierce statesmen, including the legendary Francisco I. Madero, Emiliano Zapata, Victoriano Huerta and Pascual Orozco.

Several photos of soldiers appear to be staged, but nevertheless capture the intensity and drama of that time. These include “A Federal machine gunner getting ready,” where two young men in military caps, crouch behind a machine gun and in front of a wall on which the words, “La Reforma” are inscribed. Among the more refined images are “Madero and Sra. Madero at a celebratory luncheon,” “President Madero with his family,” “Sra. Madero with ladies,” and “Sra. Madero handing out sandwiches to the troops,” all depicting elegantly dressed women with ruffled dresses and large, fanciful hats. While photographs of the Mexican Revolution have been around for decades, these recently discovered images, in the hands of a gifted curator, bring to the public a renewed look at a nation's transformative events.