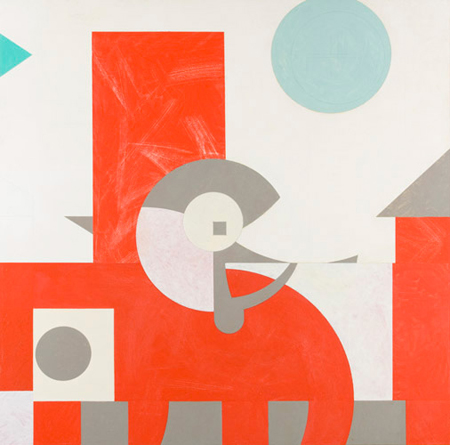 Hassel Smith is a quintessentially California painter, or as 333 Montezuma Arts director Tom Tavelli described him: “an American voice with a West Coast gestalt.” Smith’s initial forays into figurative painting blossomed into a tentative, sometimes angsty Expressionism that manifested itself in gashes and scrawls set against areas of dense color. By the 1970s, Smith was painting works collectively referred to as the “measured series”: meticulously planned paintings that retained playfully spontaneous qualities.

"Homage to the Headhunters" was painted in 1977 but looks brand new. With its tribal pattern of zigs and zags in hot orange and sable, it conveys what Billy Al Bengston called “[Smith’s] fantastic line and spooky color;” with its keen attention to layout and design, it reifies critic Alan Temko’s assertion that Smith’s measured paintings are “a celebration of rational intellect.” It would be a mistake, however, to think of Smith’s “rationality” as an aesthetic of restraint. "Flies Expect to Be Swatted" (1982) is a riotous yellow composition dotted with colorful circles. A renegade line of green shapes marches un-selfconsciously across the top of the canvas, neither defining nor dividing the space.

It’s been said that Hassel Smith’s paintings defy categorization. They are clever and strange, ebullient and triumphant — and deliciously, flirtatiously West Coast in outlook and affect.