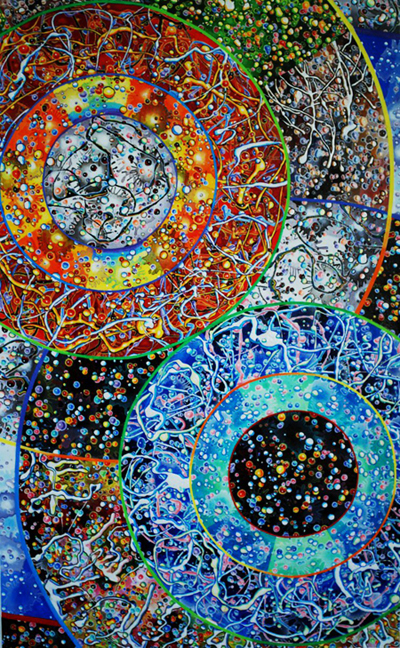 Mark Dell’Isola shows paintings as hot as the soaring July temperatures outside the gallery. Inspired by the pure colors of the Pacific Ocean and the island of Guam, where Dell’Isola lives and works, his palette is bright and tropical. His large abstract paintings vibrate with intense color and intricate detail, each one obviously requiring months to complete. Dell’Isola mixes media, layering oil and enamel over a base of watercolor and acrylic, which gives his paintings a richness and depth.

Three bodies of work comprise the show: “Refraction,” which portrays light bending as it pierces a prism or crystal; “Trench,” inspired by the Mariana Trench; and “Circle,” which consists of multiple, overlapping circles. In the “Refraction” series, dozens of triangles occupy the picture plane to create the basic structure. To a ground consisting of thousands of dots of color on black, white, and various colors, Dell’Isola adds a skein of frenetic, looping lines and splashes of translucent paint.

The “Trench” of the second series refers to the Mariana Trench located in the western Pacific Ocean. It is the deepest part of the world’s oceans, and Guam sits right on top of it. Microbial life forms thrive in this underwater world nearly seven miles deep. In one piece from the series, a dark band studded with Dell’Isola’s signature dots and scribbled lines represent the trench. A psychedelic snakelike form occupies the trench, its “arms” branching out in all directions. Surrounding it are the blues and greens of the ocean and pale pinks and yellows that suggest coral or tropical fish.