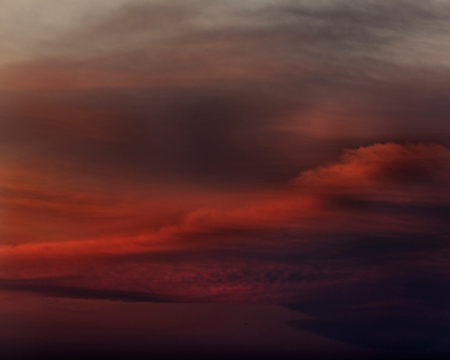 The ephemeral connects with the concise in this four-person exhibition featuring the work of Zarouhie Abdalian, Shannon Ebner, Matt Keegan, and Trevor Paglen. On the far end of the former are Paglen’s three medium-sized skyscape photographs (which address issues of surveillance), and on the end of the latter are Ebner’s images of rows of letters, punctuation and other font-like shapes, as well as Abdalian’s series of produce scales hanging one under another; rounding out the middle are Keegan’s silkscreens featuring jumbles of letters in various states of legibility.

I point out this variety in order to emphasize the conceptual intelligence of this exhibition, which is necessarily quickly accomplished (there are only eight pieces in the show): the uniting of disparate work with the cohesive thread, transmission. Each of these works is, indeed, about relaying information, albeit in an unconventional way. And where individually the works of each of these artists stands strong, curatorially unifying them in this way provides fresh connections both sublime and clear, making for a show that both visually appealing and intellectually fulfilling.