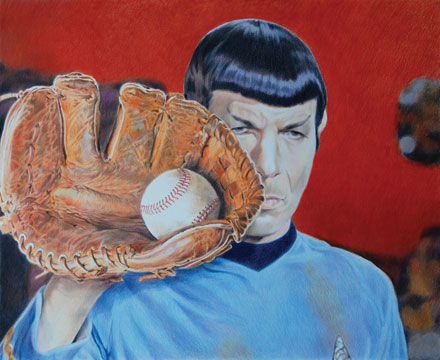 When L.A. Louver gallery director Peter Goulds and artist Christopher Pate (who is also the gallery’s Chief Preparator/Curator) co-curated their first "Rogue Wave" exhibition in 2001, my impression was that they had hopes it would become a highly regarded and anticipated (roughly) biannual summer new talent show. The pair’s ambition then as now was to scout out and present deserving L.A.- area emerging artists and place them with their similarly stationed peers.

That said, and before a rundown (with input from Pate) of a selection of work from this year’s show, one must keep in mind that the fifteen artists that make up the current group consists of anything but newcomers. In fact, all have exhibited their work on a regular basis at established galleries and exhibition spaces and several have shown in major art museums, both at home and abroad. All have received critical attention, with many having their work reviewed in The New York Times, The Los Angeles Times, L.A. Weekly, The New Yorker, Artforum and other prestigious publications, including ArtScene.

That said, let’s ride this wave, or a section of it at least, right up to and through L.A. Louver’s front doors, situated, perhaps ironically, a block away from the shore of the Pacific:

Matthew Brandt's photograph of a lake in Wyoming conceals a clever conceptual double entendre. The artist first takes pictures of this body of water, then back in his studio submerges his images in a tray of water retrieved from the lake itself. The process of water breaking down the image of water leads to the final work, which exudes a fresh and fluid feel.

Kent Familton's muted and earth-toned abstract paintings blend impressionist, color field, minimalist and constructivist influences. In a classically painterly and self-referential manner they explore the shifting sense of the space and boundaries of their own structures.

Asad Faulwell appropriates the often floral and elaborate patterning motifs of traditional Middle Eastern fabrics and art works in paintings that frame hauntingly pale, stark and emotionally charged faces of female freedom fighters who struggled from 1954 to 1962 to free Algiers from the French. Here the decorative gives way to the dramatic in a deeply moving integration of historical, political and personal allusions and content.

Sherin Guirguis was born in Egypt, where she lived until age 14. Here she presents a large triptych in ink and watercolor executed on meticulously hand cut paper that seems to burst like sunspots with joyful energy. She also has a large wood sculpture in the gallery’s upstairs outdoor Sky Room that blends Islamic patterning and western abstraction reflective of the artist’s complex cultural heritage.

Owen Kydd’s ”durational photographs,” shown on a 40” flat screen monitor, explore and reward the act of patient, meditative and perceptive looking, while exploring the subtle space between photography and film. At first his works appear to be still images until, during their four minute or so duration, a breeze might gently move an object or, in another work, a drop of water may very slowly drip.

Kim Schoenstadt will paint a large, site specific and temporary mural on the outside walls of the gallery building that will remain there for the duration of this exhibition. The piece will present a collage of images based on works of acclaimed architects' unrealized projects in a multi-layered spatial investigation that stands as an expression of hybridized architecture in its own right.

Trained originally as an animator, Eric Yahnker is terrific with satirically loaded colored pencils in hand, mashing up celebrities and iconic cultural artifacts. Leonard Nimoy's original Mr. Spock displays the familiar (to Trekkies at least) Vulcan salute to "Live Long and Prosper," only with the use of a ratty left-hander's baseball mitt with strategically broken finger lacing. "Vulcan Leather (Ball Hawk and Prosper)" in effect depicts the collision between the collective and the individual by reducing our media hero to the receiving end of a joke.

Unfortunately, space here does not allow a look into all of this very strong exhibition’s artists. However, as Mr. Pate points out, viewers will both recognize and enjoy a common thread of “visual lushness, visual seductiveness and a strong sense of materiality” in all of the show’s work.  Said differently, the wave of art at this time in Los Angeles is flowing freely, fearless and with feeling.