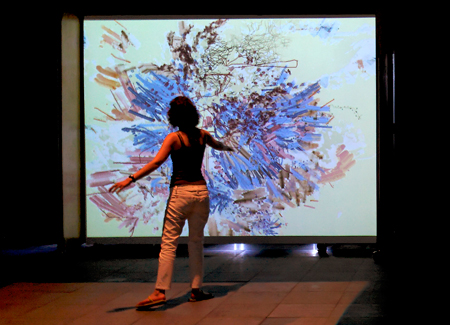 Although it is rarely articulated, curators collect. Like patrons of the fine arts acquire art, curators are acquisitive when it comes to artists, hoarding individuals for years, watching their work evolve until the time when the right exhibition comes along. The decisions made by OCMA's Dan Cameron in selecting the thirty-two artists from fifteen countries for the "California-Pacific Triennial" represent decades of observing the evolution of the global art scene. It is important to point out that a Pacific Rim exhibition, which encompasses a stunning number of nations and a few continents, is rare in its scope and daunting in the audacity of its premise. Compare the concept of a “Pacific Rim” Triennial to the typical Whitney Biennial, which barely extends beyond New York City, and you begin to realize how much the term “art world” now means “world” art.

Cameron contends that artistic and cultural vibrancy have shifted from the Atlantic to the Pacific coasts. He has gathered together artists who are in transoceanic dialogue but are rarely brought together in the same curatorial context. Who are these artists and what do they have in common, or not? Most are established mid-career artists who speak in an international visual language, recognizable across cultures. Knowing the vast array of possibilities available to this curator, it is interesting to ponder which trends in international art might be discerned. There is a nomadic element shared by many among this group. Often they were born in one country, practicing their art in another nation and exhibiting rootlessly on the international scene. An installation artist, Michael Lin, was born in Japan, raised in Los Angeles and lives in Shanghai, quite typical for this generation. Lin’s painted murals, which swallow up entire rooms, are based on fabrics from Taiwan.

This first international "Triennial," which replaces the Museum's traditional "California Biennial," sums up a twenty-year trend towards a linear drawing style that combines text and image that communicates strong messages. Peruvian artist Fernando Bryce's ink drawings that break down political and gait prop narratives personify this. A common source for precisely executed graphic painting is graffiti art, adapted into a personal but transnational language. Mark Dean Veca of Los Angeles, Eko Nugroho from Indonesia and Hugo Crosthwaite, a border artist from Tijuana, all are drawers who theatrically address the audience.

In contrast to the efforts of recent generations to mark off unique ethnic styles or gender-specific impulses, these artists speak in a broader political language, their art tending to remain foremost within the bounds of an aesthetic discourse. Thai artist Araya Rasdjarmrearnsook shows groups of Asians gazing upon iconic paintings by canonical Western artists re-placed in non-institutional natural settings. Thanks to globalization of the art world, hybrids of culturally specific but instantly translatable references can be seen in the art of Japanese born, Seattle based Akio Takamori and San Francisco's John Bankston, who address Asian and African American idioms respectively. And there is a strong trend towards audience involvement, to be seen in the installations of Guatemalan artist Dario Escobar, and audience participation, as in the interactive video murals of Camille Utterback. The artists of the "Triennial" trend away from the passive detachment of Kantian contemplation in favor of demanding some element of audience provocation.

Beyond introducing the diversity of the Pacific Rim into the Southern California discourse, it is the hope of this writer that the exhibition will raise questions and spark debate. Is a local art scene, whether in Los Angeles or (say) Milwaukee, an atavistic vestige of the past or are these specific sites the incubators of an art still free to be a cultural critique? In other words, has the internationalization of art tended to homogenize, or even neuter art's aesthetic power? One can argue that we are living in the wake of the postmodern co-option of avant-garde art, but is the economic blunting of the cutting edge what we want? In a world where freedom of thought is still being stifled, where is the new Ai Wei Wei? In a world where women are still frequently victims, who is the next Shirin Neshat? Has art become too safe? The "Triennial" has the potential to become a site where the conversation about the role of art in society can continue on level beyond what we have seen here in the past.