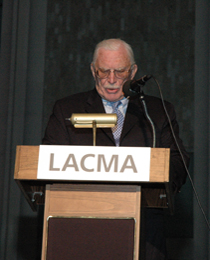 Henry Hopkins at the podium at 'ArtScene:25, The Los Angeles Art Awards in 2007

One of Los Angeles’ seminal figures in the emergence and development of a vital contemporary art scene, Henry Hopkins passed away on Sunday, September 27 due to a brain tumor.  Long a friend of ArtScene, one of Visual Art Source’s partner publications, when its 25th anniversary came up Hopkins was chosen as the namesake for a group of awards presented at the special event held for the occasion at LACMA.

Henry Hopkins enjoyed a career of exceptional depth and variety. He was a Professor Art at UCLA, a renowned historian of contemporary art, an active painter, not to mention an avid fly fisherman. He served as museum director of the Fort Worth Art Center Museum in Texas, the San Francisco Museum of Modern Art, and the Hammer Museum.

A native of Idaho Falls, Idaho, he earned both his bachelor’s and master’s degrees in art education at the Art Institute of Chicago, and worked on a PhD at UCLA. He began his museum career in 1961 as an assistant curator at LACMA, eventually becoming the chief curator and also head of museum education. After his time in Fort Worth and San Francisco, he returned to Los Angeles in 1986 to serve as director of the Frederick R. Weisman Art Foundation, where he developed the collection and its national and international exhibition program.

During his career, he lectured and juried exhibitions in 36 different states. Internationally, he has lectured widely on California contemporary art in Berlin, Amsterdam, Caracas, Sao Paulo and Hong Kong, and has served as American representative on contemporary art panels in Venice, Paris, Nagoya and Bari, Italy. He has written criticism for almost every well-known art magazine and is the author of four books: Clyfford Still (1976); Sculpture: The Modern Era (1979); Fifty West Coast Artists (1982); and California Painters: New Work (1989).

Most recently Hopkins worked with LACMA to help acquire a key sculptural tableau by Edward Kienholz, “The Illegal Operation;” and he helped initiate the Getty Research Institute’s upcoming series of programs and exhibitions on the history of Southern California art slated to be presented at 15 institutions in 2011, “Pacific Standard Time:  Art in L.A., 1945-1980.”