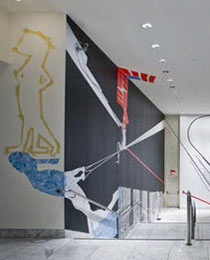 What if looking at art not only lifts our spirits and gives us aesthetic pleasure but also makes us smarter? What if spending time with contemporary art images increases our capacity to deal with the tsunami of information that floods over us every day, helping us filter through the dross to identify the significant data and make the connections we need to succeed? Well, that’s exactly what I’m going to argue here.

I’m basing my perspective on some of the things that Jamais Cascio writes about in his recent article “Get Smarter” for the July/August issue of The Atlantic. Because what he says is so important to my thesis, I’m going to summarize some of his key points here. Cascio begins by repeating neuro-physiologist William Calvin’s assertion that “modern human cognition—including sophisticated language and the capacity to plan ahead—evolved in response” to an environmental disaster that occurred 74,000 years ago: a global freeze caused by the eruption of a super volcano. “According to Calvin, the reason we survived is that our brains changed to meet the challenge: we transformed the ability to target a moving animal with a thrown rock into a capability for foresight and long-term planning. In the process, we may have developed syntax and formal structure from our simple language.”

“Global freeze” is my term; I use it in contrast to the global warming that–along with population pressures, spreading pandemics and the end of the fossil-fuel era–threaten us today. Unlike the pessimists who envision the end of the species, Cascio proposes: “if the next several decades are as bad as some of us fear they could be, we can respond, and survive, the way our species has done time and again: by getting smarter. But this time, we don’t have to rely solely on natural evolutionary processes to boost our intelligence. We can do it ourselves.”

Cascio points to “the hive mind of the Internet [and] the powerful tools for simulation and visualization that are jump-starting new scientific disciplines” as important “intelligence augmentation” tools. Unlike some writers who bemoan this media-infused era as one of “continuous partial attention,” Cascio suggests that the increasingly complex media that we engage provides “a form of cognitive calisthenics.” He continues, “Even pulp-television shows and video games have become extraordinarily dense with detail, filled with subtle references to broader subjects, and more open to interactive engagement. They reward the capacity to make connections and to see patterns—precisely the kinds of skills we need for managing an information glut.”

Many artworks perform this very function. They “reward the capacity to make connections and to see patterns.” They do so in situations that compel us to slow the usually frenzied pace of our media existence, sidestep the “continuous partial attention,” and thus not only get smarter, but also deeper. I first considered the relationship between Cascio’s discussion and contemporary art in the lobby of the Hammer Museum in July of this year. Swiss-born artist Nic Hess had installed one of his masking tape wall works. Hess’s “Automatic Crash Response” presents, according to the Hammer website, “a mixture of images in tape ranging from tombstone-like monuments of several recently failed banks, animals, how-to exercise diagrams, a generic shopping cart, the USPS logo and more to weave a lyrical quasi-narrative left for the viewer to decode.” ( http://hammer.ucla.edu/exhibitions/detail/exhibition_id/157) That process of decoding, of putting it all together and trying to wrangle meaning out of such disparate components of visual culture—that’s the challenge of a lot of contemporary art. If viewers don’t deal with the various visual clues offered in such an artwork, they are going to walk away bewildered. But if they slow down, accept that the various components are not random, and force themselves to consider what cultural relationships are being addressed, well, then they will co-create meaning with the artist and artwork. Such co-creation will exercise the same skills they need to deal with the media data that assault us on a daily basis. But it won’t just make them “smarter.” They also will derive the satisfactions—the pleasures—of a meaningful aesthetic encounter.

I am not saying that there is a specifically “correct” result yielded from a meaningful encounter with Hess’s work. Since viewing it requires intellectual collaboration between the viewer, the artist, and the images, what you “get” from Hess’s installation might be a far cry from what I “get.” The point is that the very act of working to get something—attempting to derive meaning from the disparate visual clues—is what matters. This is what also gives pleasure in contemplating the work.

Of course, the young Swiss artist was not the first the develop art like this. Not by far. Robert Rauschenberg did something similar in the 1960s with his iconic combines, such as “Monogram” (1959). Some viewers surely walked away frustrated that they couldn’t figure out what a stuffed goat had to do with a truck tire. Or what either of those things had to do with painted signs. I have a painter friend who hates Rauschenberg’s work and doesn’t understand at all that the apparently random components can be used as “clues” to the process of constructing meaning today.

But Rauschenberg was hardly the first. Think of the surrealist objects, like manikins created for the 1938 International Surrealist Exhibition. Or Salvador Dali’s “Rainy Taxi” that puzzled and intrigued viewers as they entered the show. Or, before that, Pablo Picasso’s “Still Life with Chair Caning” (1912), the seminal collage that juxtaposes painted and drawn images with actual objects and mechanically reproduced ones.

I’m sure there are historians out there who can trace the lineage of art-composed-of-diverse-objects-and-images-that-force-viewers-to create-their-own-meanings back before 1912. The point is not who did it first, but that visual artists are doing it, and have been doing it for some time. And we viewers who spend the time to figure it out are exercising parts of our brains that will make us smarter, make us better equipped to deal with today’s media world.

Hess is not the only contemporary artist to create work like this, either. Lots of artists are doing it. Ed Ruscha has been doing it every since he began combining images and text in his inimitable ways. Think of Ruscha’s great piece at LACMA: a black and white image of a very cinematic sunset—the kind of thing you might see at the end of a 1930s Hollywood romance—with the word “SIN” emblazoned right where God’s hand might be in a religious painting from the Baroque period. Sin means “without” in Spanish, and Ruscha gives “without” as the translation in the title, but there’s no denying that most viewers read SIN as sin and wonder about ethical (let’s face it, sexual) transgression. How does Sin connect with sin connect with sunset connect with Hollywood? That’s what you are forced to consider if you allow yourself to spend more than the usual five seconds most museum visitors give each artwork. Spend the time, think about it, and get smarter. That’s my advice.

While you’re at LACMA, you can get smarter with Barbara Kruger, too. Spend some time going up and down that elevator in the Broad and you will be making connections between British futurist writers and the Gap. Not a connection you usually make, I’d wager.

Not all artworks that demand viewer collaboration for the co-creation of meaning are equally successful in exercising the same parts of our brains. Far from it. Lots of the Neo-Expressionists who dominated the 1980s mixed it up—and few of them offer the rewards of a Rauschenberg or a Ruscha. Do the myriad images in a David Salle painting like “Pauper” (1984) lead you to more interesting thinking? Or does he simply reinforce the fact that, historically, both women and tribal people have been objectified and consumable? I mean, does it exercise your brain to come up with that old saw, however deplorable?

And what about some more recently famous artists? Are intellectual calisthenics required by Jeff Koons’ advertisement-derived paintings of baloney sandwiches with olive eyes and mustard-drawn smiles (“Sandwiches” from 2000)? Cute, yes. Mentally challenging, no. Even Mark Ryden, whose work I endorse, does not require a smart response. Take his “Snow White” (1997) from “The Meat Show” series. Once you get over how much the Olympia-like nude resembles Christina Ricci, and recognize that the artist is (rather heavy-handedly) equating female flesh with that big steak on the right, well. . .what else is there but astonishingly high-level craft?

Andre Breton, the French poet who founded Surrealism, argued that the simple creative act of juxtaposing two previously unconnected ideas or images would instigate new thought in the reader/viewer. And German theorist Wolfgang Iser added that art was created by the presence of ellipsis, that is, the gaps in depiction (whether textual or visual) that the reader/viewer would be compelled to fill. I’m suggesting here, again following Jamais Cascio, that some artworks go further. They force us to exercise that part of our brain that needs to be very well toned to be able to deal with our media environment, that part of the brain that filters out the irrelevant data, makes connections, and offers us new solutions to the burgeoning problems of our brave new world.