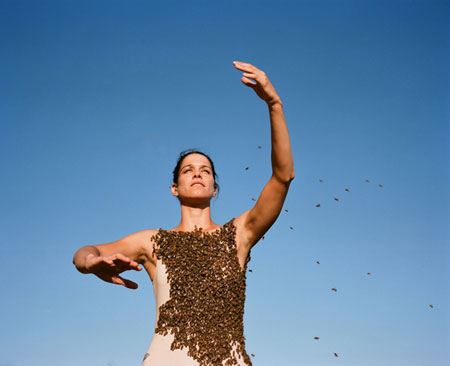 You may never have heard of Antonia Wright, but I predict you soon will. This versatile, young Cuban-American artist has already made waves throughout the East coast; and now her audacious, socially conscious work is on view in Los Angeles for the first time. Combining video, performance, photography, and poetry, Wright creates art that revolves around injustice and "the human condition." Though the exhibit is small (two videos, a framed photograph or two, and a "honey" sculpture), you will never forget it.

Throughout history art has played an important role in advocating for (or against) certain governing bodies and their policies. Wright has made activism her mission. Not only does she combine a wide assortment of art processes, she adds her sometimes nude body in the production of powerful, passionate videos that highlight her causes.

Perhaps you are already aware that bees are dying all over the world. Since bees are responsible for fertilizing the earth's fruits and vegetables, this is potentially dire in its consequences. Countries in Europe have banned the use of neonicotrinoids (the chemical that kills bees), but it's still available in the United States, thanks to our giant pharmaceutical companies. Recognizing the urgency of the situation, Wright created "Be," a performance-video-photography work that is the centerpiece of this exhibit.

In this jaw-dropping video, thousands of bees cover Wright's body as she practices Tai Chi. According to the artist, Tai Chi and bees are similar since they both have the capacity for violence; but when peaceful, they produce vitality in both mind and body. Accordingly, "Be" is a metaphor for "how to remain peaceful in the face of danger." As long as she remains calm and peaceful, no harm occurs.

A second provocative work, "Deep Water Horizon," was inspired by the Iraqi War and the BP oil spill in the Gulf of Mexico.  Although it's short, it will take your breath away.  For 33 seconds viewers watch the artist roll her naked body down filthy back alleys and back-street gutters in the dark of night - all in an attempt to feel the pain and suffering that were inflicted on innocent people.

Ostensibly, the pain, shame, guilt, and culpability should also be felt by those who were responsible - but is their suffering the same as the victims? As Wright's bruised body rolls over newspaper headlines in the road that reveal bloody deaths in Laos, Vietnam, and Afghanistan; or President Obama's low popularity ratings; or an obstructionist GOP controlled House, the artist's answer is loud and clear: Of course not! In their comfortable, cloistered retreats, they don't miss a single night's sleep.

As for artist Antonia Wright, she'll keep on creating what her love of humanity, amazing talents, and free-spirited personality command her to do.