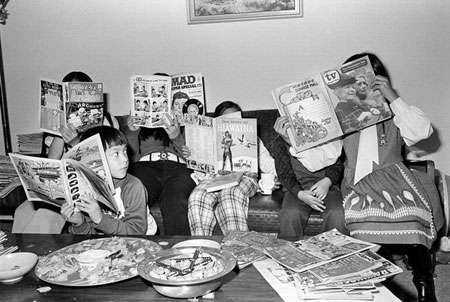 Michael Jang's exhibition “The Jangs” captures in twenty-seven medium-sized photographs an intimate snapshot of the lives of members of the artist's family in the 1970s. Pulled from the archives of the then–Cal Arts student, and not exhibited for forty years, the black-and-white images provide a peek into the everyday life of this Chinese-American family — specifically, Jang’s aunt, uncle, and three cousins — in suburban Pacifica, California.

Several of the images have a staged quality, while attempting to appear spontaneous. Such is the case with “Study Hall,” in which five children (one would assume they are the cousins and a few friends) sit on a couch, their faces hidden behind comic books; a sixth child sits on the floor, looking back at the others, his publication only partially held up, as if unsure of what to do. Other images clearly capture spontaneous moments: the family at a party, the family in the kitchen preparing a meal, Jang’s aunt on the phone. Some images have a voyeuristic quality; for example, "Monroe and Cynthia Watching T.V." is a shot of Jang’s uncle and cousin are splayed out watching television, utterly oblivious to the camera. Shots of pets and a few peopleless views of the home interior round out the narrative.

These well-crafted, well-composed snapshots depict not only personal daily life and its surroundings in a time now dated, but also the multiple creative explorations and experimental tactics of a young artist honing in on an artistic voice that we know achieved maturity.