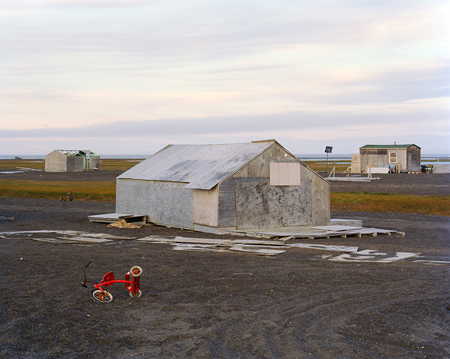 I have long been fascinated by the extreme changes that are brought about by the presence of mere water, especially when it’s frozen: snow and ice. Not surprisingly then, I was immediately drawn to photographer Eirik Johnson’s diptychs featuring, on the left, a landscape in summer and, on the right, that same landscape covered in the white of winter. Nine of the works, all of which are 16 x 20 inches, feature elk hunting lodges in the far northern town (a short 320 miles from the Arctic Circle) of Barrow, Alaska. While there are signs of life — a tricycle, the basic often rudimentary cabins — no people or animals are present. A tenth piece, notably larger than the rest (each measuring 37 x 45 inches), features the seaside and is accompanied by audio of the movement of the water over the coarse and rocky ground.

The landscapes are barren, scrubbed raw by nature. The muted colors of summer and monotone of winter readily convey the isolation and certain quietness of the area. And while there is a gentle and consistent beauty to the images, the star of the show is the seaside piece. On the left, the sharp contrast of the bluish to white water meeting the dark land creates a distinct line that slightly curves almost straight up the middle of the image, T-ing into the horizon, which is about halfway down the picture. Above it is a flat, white sky. The same site depicted in winter, which features a horizon line that matches the image to the left, is almost completely white, the land decipherable from the sky only because of the large, chucky pieces of icy snow. The starkness of the images renders them almost abstractions, pushing this diptych in particular beyond the harshness of reality into a sublime otherworldliness.