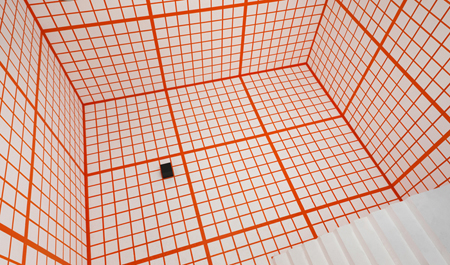 "Orange Grid" is a site-specific work by conceptual artist Channa Horwitz. In the cave-like space of the gallery Horwitz paints the walls and floors into a grid of orange lines. Using a three dimensional space as her canvas allows the artist to deepen the levels of abstraction and illusion. Within the space are black objects of varying widths and heights, all sized to fit within the grid. We are permitted to reposition these objects, changing the composition as we please. The works extends from the gallery's interior to the outside wall, where the "Orange Grid" extends as a mural onto the gallery's facade. Here the crisscross of orange lines is disrupted by black circles and arcs that add another layer of depth.

[Horwitz passed away during the run of this exhibition, on April 29, age 80--Ed.]