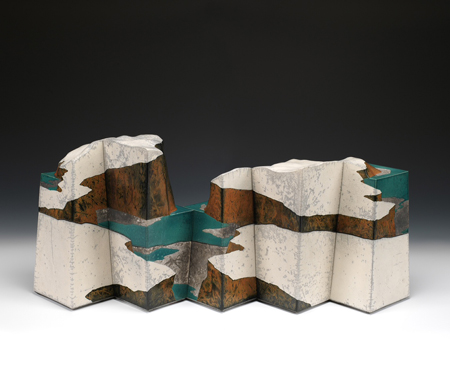 When the American Ceramic Studio movement hit its stride in the 1960s, Wayne Higby was one of its leaders, garnering fame for his raku-fired vessels that took inspiration from his world travels and study of ancient clay practices. Higby has never stopped exploring the vast potential of clay as a medium, and the breadth of his work is on stunning display in this retrospective, curated by Peter Held of ASU’s Ceramics Research Center.

In addition to Higby’s signature raku bowls from early in his career, the retrospective includes inlaid plates and covered jars, along with a generous number of ceramic sculptures from the last few decades. In these Higby plays with canyon, mesa and river imagery to produce variegated polyhedrons -- luminous pieces that evoke the colors, ruggedness and striations of the American West’s topography. Higby’s more recent large-scale architectural reliefs are represented with samples or “sketches,” such as those from “EarthCloud 2006/2012,” an installation of 12,000 hand-cut porcelain tiles installed at the Miller Performing Arts Center in Alfred, NY. Higby says the center’s atmospheric walls of jagged white tiles with gold luster might well be his defining work.

Also on view are four pieces from the “Lake Powell Memory” series, in which cracked slabs of porcelain rest in boulder-shaped notches, reminiscent of the lake’s canyon walls rising from the rocky desert floor. Higby, an admirer of mid-19th century Luminist painting, would probably be the first to say that his vessels and sculptures can’t fully capture the landscapes so imbued in his and our memories; they are merely the starting points.