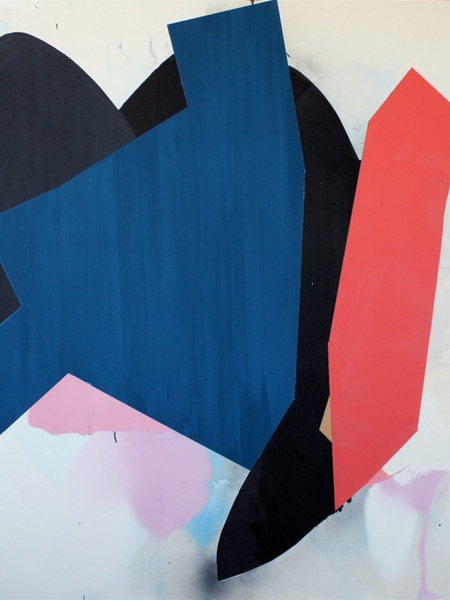 Strong colors and stronger shapes fight for space in Marcelyn McNeil’s large-scale abstract oil paintings. According to the artist, she develops her shapes and backgrounds simultaneously. “The work is about push and pull,” she said, referencing Hans Hofmann, the German abstract painter. Hofmann was an influential teacher, spreading his theory that the illusion of space, depth, and even movement on a canvas could be created abstractly using color and shape rather than linear perspective.

In these exuberant and colorful paintings, McNeil explores chromatic relationships while creating spatial tension. Her forms appear to be moving in and out, pulling the eye to various areas of the painting rather than letting it rest in one particular spot. She is a modernist in that she remains faithful to the flatness of the surface, eschewing modeling or linear perspective to create the illusion of depth.

McNeil’s begins by pouring several thin layers of paint on the canvas, sections of which may be taped off to create distinctive geometric forms. If the paint bleeds or drips, she considers it to be a fortuitous accident. “Brawling Bodies” is a study in contrast, with strong interlocking red, blue, and black shapes hovering above layered pale pink and blue forms. “Good Day, Bad Day” is more geometric, with yellow cloud-like forms against multi-colored stripes in shades of black, blue, and gray. Color is a key element in McNeil’s work, and she would no doubt agree with Hofmann’s words: “The whole world, as we experience it visually, comes to us through the mystic realm of color.”