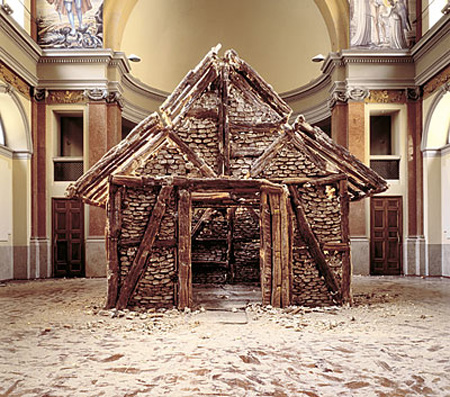 Whether you believe that they're on the upswing on the heels of their recent declaration to remain an independent institution (vs. merging with LACMA), or that they're still very much in desperate need of finding their mojo, this Urs Fischer exhibition, which will span from this spring well into summer, provides a formidable injection of energy. In the contemporary art landscape, it's hard to imagine a hotter rising (if not already risen) star than the Swiss-born Fischer, who lives and works in New York. Being a retrospective, the exhibition will include work dating back to 1996 (an installation-oriented sculpture combo of "Skelett" and "Untitled (50 Rocks)"), though the bulk of it will be from the last decade.

One of Fischer’s most impressive achievements in a still-young career has been to acquire institutional and even avant-garde cred from museums — e.g. the 2006 Whitney Biennial — while also producing work that is highly accessible, with a populist appeal. For "Portrait of a Single Raindrop" (2003/2013) Fischer hacks out a large, oval chunk of wall, in turn framing adjacent sculptures, along with the relocated sections, on both sides. This repeats a gesture that arrived with more aplomb in ’06, when several of his Biennial neighbors became partners — unwittingly or wittingly — in Fischer’s dance. Though "Portrait" may very well be a less potent iteration, it could still stand out in its relative rawness amidst many crowd-pleasers. In addition to evoking Gordon Matta-Clark, "Portrait" may also attempt to commune with the spirit of Chris Burden’s "Exposing the Foundation of the Museum."

This isn’t the first time Fischer’s work has appeared at MOCA; roughly the same time last year, a 12 1/2 foot, mixed media on aluminum piece from 2006 showed up in "The Painting Factory: Abstraction After Warhol," a show that bore the heavy imprint of Director Jeffrey Deitch. As an impresario of brassy, swashbuckling exhibitions, this Fischer retrospective feels to be right in his wheelhouse (that said, it is the Tate Modern’s Jessica Morgan who is the curator). In a show made up primarily of painters, or at least artists for whom painting is far more integral to their work than it is to Fischer’s, his inclusion in "The Painting Factory" was a bit out of place, but certainly prescient in one sense: Fischer does indeed man quite a factory, albeit the 21st century incarnation of one. He has enough assistants (presumably nothing approaching Jeff Koons’ or Damien Hirst’s full-fledged corporations) to maintain a steady stream of production on a range of different projects, from giant, super-slick Baldessari-esque portraits (shown at Gagosian last year), to even larger outdoor sculptures that require some components to be produced in China.

Detractors tend to criticize Fischer’s work for carrying too much residue of a factory line and its attendant formulas. But it’s far more productive to focus less on who populates Fischer’s studio than the production values it’s able to deliver. Sadly, the installation of assorted sizes of silkscreen-print-on-mirror-polished-stainless-steel sculptures, which made his 2009 show at New York’s New Museum so appealing, are not on hand. Instead however, there will be more recent versions of that direction in the form of far smaller silkscreen-on-mirrored-glass pieces that feature the same strategy, in which alternately seductive or banal objects recur in life-size high-res on all sides of a rectangular cube.

As for the crowd-pleasers, they range from 2004-05’s "Bread House" (just what it sounds like, along with some dramatizing accoutrements); several skeletons in an array of poses (stretching, lounging, trying to get unstuck from a box); and, perhaps most salacious of all, an installation of human-scaled candles, crowned by a re-creation of 16th century sculptor Giambologna’s "The Rape of the Sabine Women." All components of this work, assuming it takes the course of its appearance in the 2011 Venice Biennale, will melt as the show progresses. In Fischer’s case, it remains to be seen if “crowd pleasing” is pejorative or will simply mean great traffic (New Yorker critic Peter Schjeldahl, when writing on the New Museum show, referred to Fisher's effort as "desperately ingratiating.") The question is whether Fischer’s overt and fully accessible poetry will penetrate deep enough to transcend a quick, though not cheap, thrill or whether it is indeed so skin deep that we've already forgotten about it by the time we've driven home.