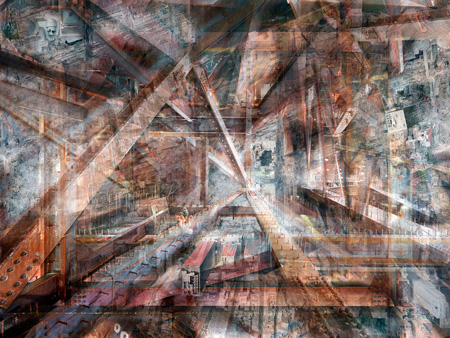 Two types of images comprise photographer Shai Kremer’s solo exhibition: one hovering on abstraction and one documentary. Interestingly, the works from both series present very similar material: the former are overlays of images tracing construction at the World Trade Center site; the latter juxtapose decay and the shiny lights of the city. Each in its way speaks to change over time; birth, death, and rebirth. In so doing, they contribute to the greater historical discussion about photography that, while images may show us reality, it is always fleeting.

The near abstract images result from layering many images atop one another. The effect is painterly, the surface built up with peaks at and cubistic echoes of what came before, calling to mind Duchamp’s “Nude Descending a Staircase.” A long look begins to reveal various objects and scenes; from chaos emerges clarity as the eye separates the pictures. The contrast to the more straightforward work — cityscapes of New York, taken from afar (the “edges”) — returns us to the more conventional way we experience photos, brings us back to a clear view. Seeing is not always believing, but often it is.