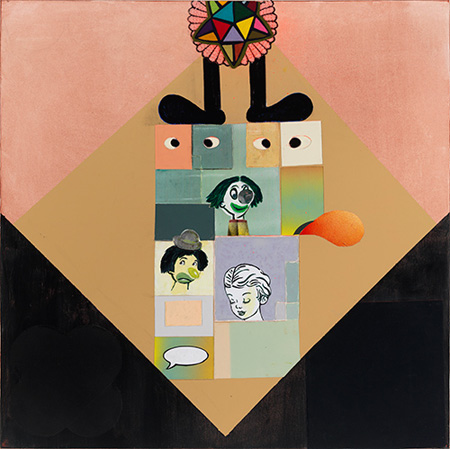 Chicago artist Phyllis Bramson has been practicing at a steady clip for over 40 years, during which time she has remained nestled resolutely within Chicago’s Imagist tradition. The figures here are skillfully rendered, stressed and uncomfortable, and with a healthy dose of kitsch. Given this adherence, Bramson has developed a full pictorial language all her own.

Bramson’s paintings have come to be known for fully- or semi-nude subjects, strange sex, gaudy ornament, vintage Americana imagery, and associations with Orientalism, with all its adverse connotations. All of this continues to pervade the works in her current exhibition “Love and Affection in a Troubled World.” While the density of her earlier works are satisfying for their overwrought complexity, many of the current works are simpler, with hard-edged shapes and geometric abstraction governing the compositions. Intermingling these flat, saturated forms with Bramson’s lively and peculiar figures produces a distinct visual tension - a new development that certainly pays off.

Glitter, pom-poms, appliqué and printed paper mingle with a wide range of painting styles, from thin layers, loose gestures and airbrush-like spurts, to tight representation and cut and collaged bits sourced from the paintings of factory-like commercial production or flea market and thrift store finds. A preoccupation with lowbrow art is matched with the artist’s reverence for high art's historical canon. Allusions to art history have always been a key element in Bramson’s works, and within the paintings here the artist nods often to minimalism. "In Praise Of Folly—The Maze Speaks" pares Bramson’s ubiquitous figure down to a mere headless torso relegated to the lower corner of a work featuring a winding maze emitting a speech bubble along with a tiny ode to Brice Marden collaged in the upper left corner. Works like "In Praise Of Folly—Spider" and "In Praise Of Folly—Melancholy Abstraction" are each punctuated with weighty black shapes, creating stark, formal divisions within the pictures.

The emphasis in on bold, abstract elements in many of the works in “Love and Affection in a Troubled World” lends an air of order to the myriad of references, sources and materials Bramson has accumulated throughout her long career. "Eve," the sole sculptural work in the exhibition, is a Buddha-like figurine encrusted with cheap fabric flowers and ceramic tchotchkes. She is paired with a small round canvas on the wall. Placed at the entrance to the gallery, "Eve" presides over the rest of the works in Bramson’s exhibition with a calm countenance, setting the tone for a focused and mature body of work.