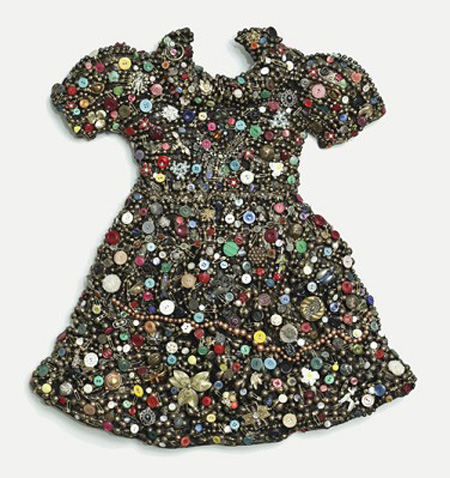 Mixed media artist Nancy Youdelman uses recognizable, even mundane materials — old photos, buttons, and beads — to create assemblages that are irresistibly beautiful and majestically feminine. Youdelman was an early student of Judy Chicago’s Feminist Art Program at Cal State Fresno, where her studies in costume design led to an art practice now in its fifth decade.

In "The Presence of Absence" a dress-shaped relief is covered with a glittering constellation of little brass beads, toys and doo-dads and buttons in every color of the rainbow. "So Many…" is a tiny dress that looks sized for an infant. It’s implicitly touching and, with its dense patchwork of iridescent buttons, it’s visually captivating. "Forever Bound," a nude doll wrapped all over in rose-colored thread, is an edgy piece that departs aesthetically from its dress-shaped neighbors.

Despite an elaborate technique that incorporates bits and pieces of everyday objects, Youdelman’s works are never kitschy, and their built-up decoration nevertheless retains an earnestness that prevents one from interpreting them as strictly decorative objects. They serve as mysterious, even haunting testaments to a distinctively feminine mystique.