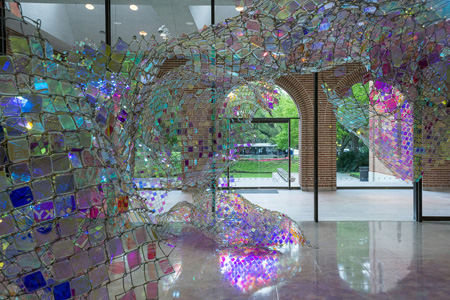 Soo Sunny Park manipulates light the way painters manipulate paint and sculptors manipulate their various mediums. Waves of iridescent projected color flow through the gallery space, reflecting and refracting light onto the walls, ceiling and floor. The method is simple, but the results are not. Thousands of iridescent squares of Plexiglas have been wired into the cells of chain-link fencing that Park then shapes into undulating “units.” Thirty-seven of these units are suspended from the ceiling, attached to the walls, or placed on the floor, creating a shimmering space that changes as one walks through it. Another variable is the natural light that flows into the gallery through the front glass wall and the large windows that from the foyer.

“Like a net, the sculpture is a filter that is meant to capture the light that is already there and force it to reveal itself,” Park explains. “Now we can see it, the light, in purple shadows and yellow-green reflections that both mirror the shape of the fence and restructure the space they inhabit.” The reference to weaving is apropos, considering the horizontal and vertical metal wires which form a grid. Park’s addition of Plexiglas cutouts, with their translucent and reflective surfaces, dematerializes the fence’s grid, hence the title, “Unwoven Light.”