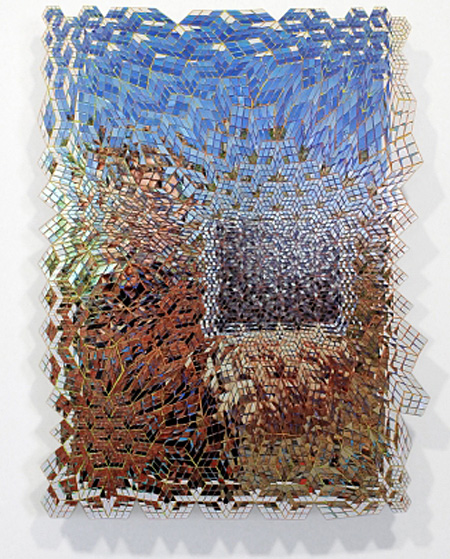 Bay Area artist Christopher Taggart presents a wide variety of work, all meticulously planned and crafted. For one group of work, Taggart cuts up decks of playing cards into very small pieces, each deck of a particular subject — 360-degree views from the Empire State Building, aerial photos of California state prisons, images of a fellow artist Sean McFarland holding up his own artwork. He reassembles them in a predetermined pattern that he lays out by hand, piece by piece [save for the work featuring the prisons, “Colony (Scales of Justice),” for which Taggart set up a computer program that arranged the pieces]. The resulting works, some of which are quite large (for instance, “People Looking at People,” which features the Empire State Building views and measures 112 x 135 inches), readily reference quilt-making and mosaic. The pieces create mesmerizing eye movement to the point of becoming meditative.

The show also includes a pair of sculptures (one with moving parts), a video, and a trio of etched works. The standout video, titled “100 Years Later,” is an homage to Duchamp. It features 500 16-second loops of a person descending a staircase (actually, it is the gallery’s staircase); these have been interspliced together and fragmented, lending it an appearance that references the aforementioned reassembled cards and pictures. Each of the people descend at the exact same rate, so that even though the images are chopped up, the movement is consistent, again lending a meditative quality to the work; it’s not unlike watching a waterfall or stream.

The common thread throughout the show is the precise, mathematical planning behind each piece (Taggart has a degree in physics). So while the appearance may seem chaotic, there is an underlying structure that is palpable. So then, instead of inspiring a frenetic or anxious feeling, one is left feeling peaceful (and a bit in awe for the obvious planning and labor invested). It speaks to our innate identification of order, structure in what at first appears to be a decidedly disorderly situation.