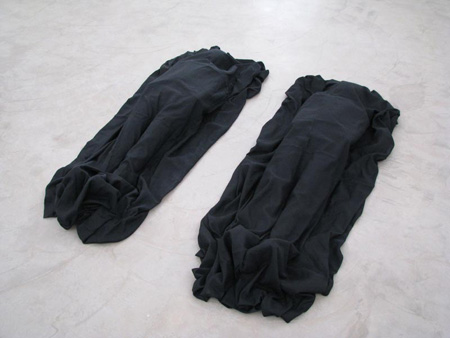 In her current solo show, Deb Sokolow fills the space’s two galleries with her distinct style of drawing: a blend of illustration, graphic novels and architectural layouts. However, a pair of sculptures, "The Bodies in Mitchell's Cabin," immediately command the viewer’s attention on entering, setting the exhibition’s tone. Lying in the middle of the floor are two black cloths, each covering what looks like a small human figure. Foreshadowing the absurd and sinister narrative Sokolow has concocted here, the “bodies” serve as a prime example of the circular path of reasoning viewers must take in order to fully experience the superb mixture of bizarre facts and wildly inventive plots that make up the work’s content.

In Gallery One, viewers circle the enshrouded “bodies” as they move along the wall, along which they examine works on paper and handmade books. Sokolow is well known in Chicago and beyond for her elaborate schematic drawings and the blocky, all-caps handwriting that unfolds the main plot, the side notes and the interjected commentary inscribed throughout. Read more like pieces of literature than two-dimensional artworks, Sokolow’s ink, pencil, acrylic and collage drawings bear layers of erased, painted-over and blacked out lettering, evidence of her fervent process of crafting and reworking her narratives.

Each piece in Gallery One engages an obscure topic, ranging from the mystery of the Nazi-looted Amber Room, to the topography of a mountainous landscape, to a skeptical look at the composition of meat used for Philly cheese steaks. A particular vignette introduces us to an organization of criminals called The Association. From this presentation of disconnected information, viewers’ imaginations are piqued and suspicions aroused as they begin to construct the intellectual groundwork for comprehending "All Your Vulnerabilities Will Be Assessed," the complex narrative in Gallery Two that is at the crux of the exhibition.

"All Your Vulnerabilities" is a single large piece made up of multiple works on paper pinned together across the walls like the compulsive collaging of some paranoid madman. The nonlinear plot revolves around the artist residency program Sokolow attended in Norway, interwoven with the scenarios encountered in Gallery One. The second-person protagonist known only as “you” falls for a scheme in which artists who worked as museum guards are brought under false pretenses to a residency in Norway, where they’re bribed into becoming agents for The Association, and are surrounded by other mysteries like the Norwegian mountains that might contain trolls to be used for Philly cheese steak meat or caves full of long-lost Nazi spoils.

Despite culminating in the deaths of several uncooperative “artist residents,” the tale feels open ended, prompting viewers to go back through the exhibition for a second look. A second round of perusing drives home the details that lead up to this dire tale, including the reason why “you” would take any part in these shady goings-on in the first place, as indicated in a small text piece:

"MANY ORGANIZATIONS ARE PARTICULARLY ADEPT AT IMPLEMENTING MULTIPLE FORMS OF MANIPULATION IN BOTH PROFESSIONAL AS WELL AS MORE INFORMAL, MORE PERSONAL SITUATIONS/ IN ONE OF YOUR MORE DETACHED MOMENTS, YOU FIND YOURSELF ADMIRING THEM FOR THIS."