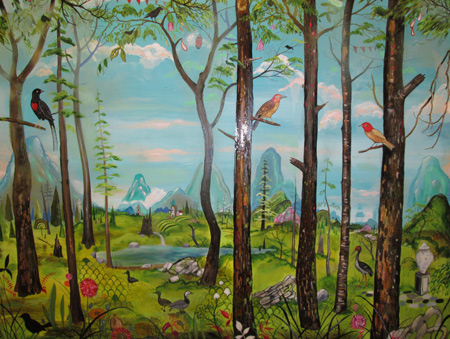 As the distinctions between irony, post-irony, and post-post-irony grow ever less distinct, it is refreshing to encounter artwork as unselfconscious as Wesley Younie’s self-titled exhibition. Younie, an emerging artist and Portland native, embraces the woodsy, ecologically aware work of his elders, like contemporary Northwest masters Bruce Conkle and Tom Cramer, both of whom marry whimsy with a mixture of 1960s-inflected, back-to-the-land utopianism and high-Tolkien fantasy. In paintings such as "Pleasure Garden" and "Sanssouci" Younie conjures fantasias of lotus flowers, waterfalls, pagodas, and distant mountains, all unpeopled but dotted with the occasional heron or deer.

The artist judiciously deploys gold leaf to depict clouds or to encase animals or figures in enveloping backgrounds, as in "Captured Unicorn," which evokes Byzantine iconography. Wry humor comes through in sculptural works such as the foam and mixed-media "Magic Mountain" and "Lost Mountain," with their mint-green outcroppings of faux evergreen trees, and the sconce-like "Mushroom Lodge," with its fuzzy green moss and red-capped fungi. Finally, the agreeably cheesy water sculpture entitled "Fountain of Youth" takes a found object as its point-of-departure and turns it into a feverish, psychedelic dream of pastel rocks. Throughout the show, Younie lavishes just enough material sophistication on his modern-day icons to suggest reactionary, neo-Romantic fondness, but just enough drollness to keep the subject matter from careening into Renaissance Faire hyperbole.