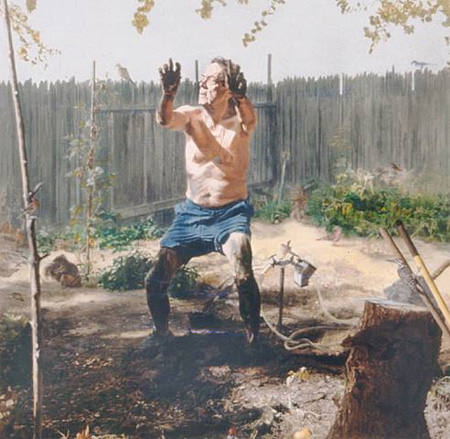 We humans are meaning-making animals; our minds are constantly enacting symbolic transformation of our experiential data. Such transformation is particularly important for those data that elude rational or scientific containment: the insights, epiphanies, and transcendent experiences of connection that we call spiritual.

Visual artists have been concerned with the spiritual since the beginning of recorded history. Think of the temple figures at Ancient Sumer, the Egyptian paintings of Horus, and the Shang bronzes - the last two combining human and animal forms to evoke that which transcends either realm. After more than four millennia of figurative metaphors for spirit, in one of the great revolutionary gestures of Modernism painters like Vassily Kandinsky turned to abstract portrayals. Today, spiritual artists range between representational and non-objective, with honorific homage and resonant innovation. The contemporary extent of this range is compellingly illustrated in “Inner Journeys, Outer Visions.”

Viewers entering the gallery space are immediately confronted with Lynn Aldrich’s "Silver Lining," a cluster of over fifty steel downspouts hanging from the ceiling. Their insides painted different shades of blue, the downspouts recall slender snatches of sky — of heaven — seen through the constraints of the built environment. More immediately evocative of the spiritual is Aldrich’s "Ray," an ethereal incline comprised of 240 strands of thread, angling from the ceiling to the gallery floor. Expertly lit, it becomes that single ray of light artists have long used to represent divine insight. Think of Caravaggio’s "Conversion of St. Paul" (1601), where a burst of light knocks the Roman soldier off his brown and white horse.

Exhibition curator Sara Cannon could not place a Caravaggio beside Alrich’s illuminated threads, but she did make the brilliant decision to flank "Ray" with two luminous Patty Wickman paintings. "Outside the Garden" depicts an older man whose legs and arms are caked in dark mud. He rises up from his earth-bound task, having just “seen the light.” His visage riveted, his quotidian contemporary existence gives way to Baroque splendor.

Diagonally across from Wickman’s paintings — and thus also from "Ray" — are several powerful works by Ruth Weisberg. One depicts two hands raised in supplication, another a group united in prayer. The most compelling is "Threshold," an image of a young woman opening a door. The simple act resonates in two ways. She may be walking out of a dark space, perhaps a concentration camp, into freedom … or life … or afterlife? She also appears to be stepping from isolation to connection, from aloneness to at-one-ness, from sorrow to spiritual joy.

Joy is the subject of Gilah Hirsh’s contributions to the exhibition. Her eight remarkable paintings survey a vibrant world of cells and globes floating in a watery cosmos, of pods and flowers and skin spiraling through the ether. Hirsh envisions a biomorphic universe populated by incipient life forms, shimmering in color and light, all vibrating to the music of the spheres.

The ancient Greek philosopher Pythagoras proposed that the planets emit their own unique sounds — he called them “orbital resonances” — as they spin through space. These sounds are visually encoded in Bonita Helmer’s paintings. Explosions of light and matter burst through deep blue skies. Stardust rains down through solar curtains. Pomegranates — symbolic of divine fertility — inseminate galaxies. In her heady mix of physics and the kabala, Helmer crafts a visual parallel for the spatial ocean of harmony.

Following Pythagoras, Plato proposed that divine order “geometrizes continually.” From the ancient belief in mathematical underpinnings of the universe comes what is known today as “sacred geometry.” This geometry is the basis for many of Craig Keith Antrim’s paintings.  Antrim combines circles, spirals, and ellipses with scintillating gold leaf to create paintings that evoke both sacred relics and the divine to which they are pointed. Deploying the unique alchemy of art, Antrim unites the physical with the ethereal, establishing the union that is the basis of the spiritual quest, as we earth-bound creatures continue to seek the light.