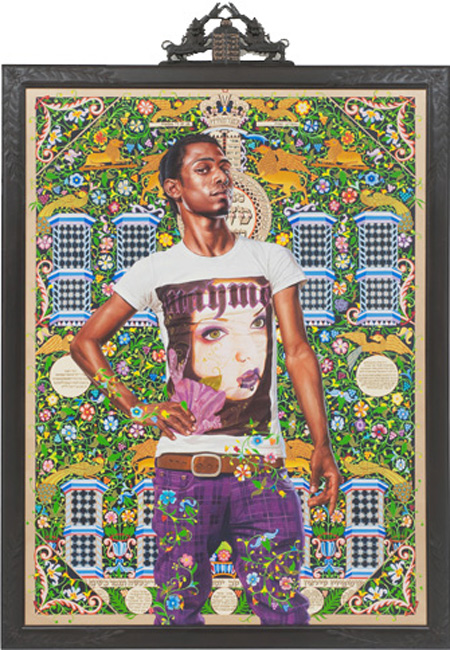 In his trademark bright, bold style, Kehinde Wiley presents a stunning series of portraits featuring his long-preferred subject: young, beautiful, powerful black men. Specifically, for this series, Wiley’s subjects, while ethnically diverse, are primarily Jewish, and all reside in Israel.

The men, who directly address the viewer with a straightforward, strong gaze, are posed centrally, outfitted in contemporary urban dress (all models are wearing their own clothes) in life-size works, some which feature the subject from the chest up; others are grand full-body paintings. The backgrounds are signature Wiley: highly patterned, steeped in cultural references — here, they are all related in some fashion to Judaism — and ablaze with color. To augment and give greater depth to the show, the textiles the backgrounds are based on are also on display.

As with Wiley’s previous work, these pieces can be read on multiple levels. At the outset, they are finely painted, almost photorealistic portraits. There is a purposeful mixing of the current and the past, thereby connecting the person to the traditions of culture. This is further emphasized by the flatness of the works; the subject and background reside on the same plane. In some pieces, in fact, the pattern moves into the foreground, literally as well as semiotically engulfing the subject in tradition.

That Wiley has settled on the genre of portraiture is no accident. Traditionally, of course, the focus of portraiture, especially when the subject is being portrayed as powerful, has been on rich or otherwise forceful white men. Wiley choosing to paint only black men and, here, not men of particular celebrity or fame or status (certainly they’re all fit and self-possessed) operates on multiple levels: it highlights the historic void of black men, especially strong black men, in art, and also demonstrates a strength of character that can be found even among the general public of this particular subgroup. It is also no coincidence that these men display a sensual homosexuality in stance and dress, adding one more element; this also happens to be a subgroup that hasn’t been historically prominent. We take it as part of Wiley's purpose to correct this injustice. The twist here is that whereas homosexual men are often seen as weaker than their heterosexual counterparts, here they are definitely not — both physically and in constitution.

There is no question, these paintings are beautifully executed and easy to like: they’re big and colorful and eye-catching. They’re also predictable in that Wiley’s stylistic formula, and it has made him an art star, has wavered little in years. So it is certainly fair to state that the work is “been there, seen that” — not exactly the kind of innovation likely to keep the art world’s attention much longer. Where’s the evolution? Where’s the push? To be sure, it's in the subject.

So the repetition is also part of Wiley’s point: the art world is still lacking in both strong, positive black and homosexual imagery. Wiley shows this category of men to be many, the cultural context in which they appear diverse even if the imagery he invokes is not. Perhaps, in the end, his contribution will be not only to present an overlooked, underrepresented slice of humanity, but also showing it in its real-world abundance.