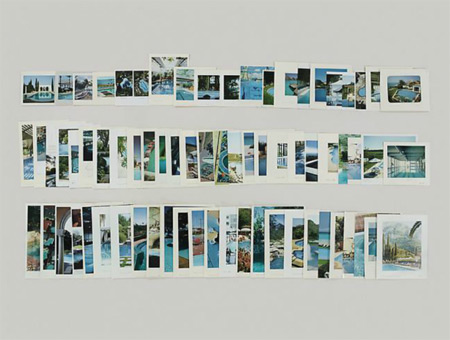 In a new series of work, New York–based artist Taryn Simon delved into the Picture Collection of the New York Public Library. Each photograph in “The Picture Collection” features an arrangement of the contents of a folder of images focused on a particular topic or subject: handshakes, swimming pools, rear views.

The New York Public Library Picture Collection has been and still is a coveted research tool. Before the Internet and search engines, this was how images were found — by hand. Simon’s presentation, highlighting her method and her tool, then, is both a reminder of times past (not only is this a now low-tech search, but the photos themselves are historic) and speaks to the revival of interest in hand-done processes and their tools. Here the artist site with a making trend — knitting and book-making; manual typewriters — in an all-too-fast-moving world. To wit, these artworks are documentations, after all, of hand-crafted collages.

The arrangement of the images adds another layer to be considered. The pictures of abandoned buildings, for instance, are laid out in three straight lines, each image on top of the next, with just a small part of the edge of the picture underneath showing, so that the only image completely visible is the final one. These are places left to deteriorate, forgotten — no longer important; no longer seen.

Finally, Simon’s (continued) fascination with organizing, grouping, categorizing the details of our world (a fascination that’s clearly shared by the greater population, as evidenced by the massive efforts we’ve gone to to make such collections, here and elsewhere) points to a much grander search, and her choice of subjects such as Israel, avalanches, accidents, and the veiling of women highlights this: the search for sense and orderliness, some control, in a chaotic and irrational world.