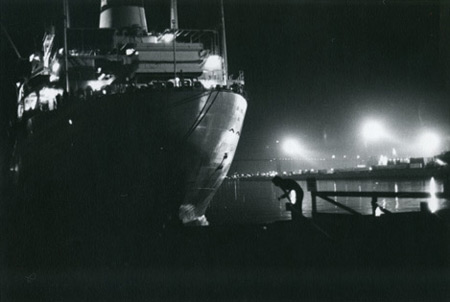 The re-appearance of Bas Jan Ader via this heedfully staged selection of his photographs is particularly poignant for those familiar with the circumstances of the now legendary artist’s early demise. The thirty-three year old disappeared in 1975 while attempting to complete the second stage of a performance, “In Search of the Miraculous,” crossing the Atlantic alone in a 13-foot sailboat. A self-portrait of the handsome romantic, “I’m too sad to tell you” hangs centered on the wall to the left as viewers enter the gallery.

Along with four studies for the work displayed on an adjacent wall, this grimacing image (similar to shots Ader made in an early 70’s silent film of the same name) simulates the artist’s farewell. Across the gallery, “The Artist As Consumer of Extreme Comfort,” an archival digital print accompanied by three studies, reveals Ader’s interest in exploring the boundaries between security and adversity. Ader positions himself in an oversized chair, book in hand, dog at his feet, fireplace lit. His profile is outlined by the light emanating from a well placed floor lamp.

This comforting domestic scene contrasts with a string of 26 small, dark, outdoor prints run together in a row across the back wall of the gallery. These document the artist wielding only a flashlight on a nighttime walk through the streets of Los Angeles. “In Search of the Miraculous (One Night in LA)” becomes Ader’s noir version of Ed Ruscha’s “Every Building on Sunset Strip.” The next segment of what was to be a three-part series was the aforementioned Atlantic voyage. While testifying to Ader’s interest in the mystique of boats and harbors, "One Night in LA" foretells a dark end and the inevitability of his ill-fated final performance.