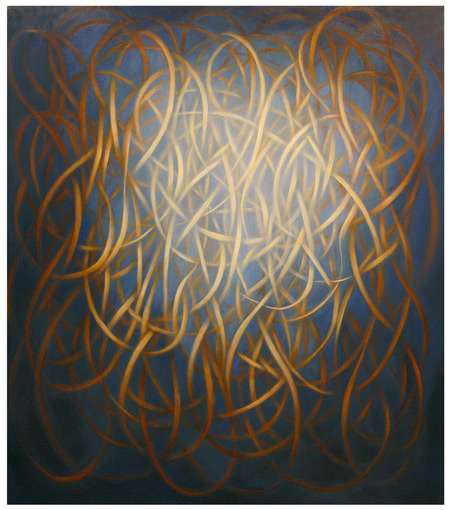 “Make it new,” the poet Ezra Pound implored poets and writers in the early 1900’s in what would become a defining anthem, theme, goal and practice of modernism throughout all of the arts. L.A. painter Shane Guffogg bases the work in this exhibition on Leonardo da Vinci’s "Ginevra de’Benci," and in doing so renders the old quite new, answering the poet’s call with remarkable inventiveness and a plethora of well-seasoned skills.

Leonardo painted this work sometime around 1474, and it was his first portrait painting. The original hangs in The National Gallery in Washington D.C. and represents the only painting by Leonardo presently on view in North America. Guffogg re-imagines the Renaissance work in a show titled “The Annunciation of Ginevra de’Benci: Conversations with Leonardo.” The fifty-two oil paintings on canvas that comprise this series stand in equal measure as a conversation with and a meditation on the 15th century masterpiece.

Guffogg relies on his signature illuminated ribbon motif, comprised of flowing, interlaced and intuitively rendered lines of paint. These probing vectors dynamically morph into tangles of depth-infused contours suggestive of both da Vinci’s young female sitter and archetypal models of the female form.

Extraction becomes abstraction in these paintings (all titled "Ginevra de' Benci," then simply numbered), which succeed as both glowing appropriations of da Vinci’s masterpiece and testaments to Guffogg’s commitment to sustained and intense looking. For example, in "#13" a subtle yet distinctive oval shape draws the viewers’ eyes to the canvas' center, where it establishes both a mask-like silhouette functioning as de' Benci’s face and as a portal aimed at this work’s (and da Vinci’s) imaginative depth.

Guffogg’s blend of resin and oil paint situate bursts of light in places that correspond to the multiple light sources in da Vinci’s work, but in Guffogg's case we cannot separate the incandescence from the color it illuminates.

In "#13" as well, Guffogg’s golden nest-like bouquet of swirls mirrors Leonardo’s own overriding and unifying earthy palette as well as de' Benci’s curly hair. One might think of Guffogg’s paintings (particularly "#48," "#50" and "#51") as exquisitely modulated color tone poems, which offer analytical visual riffs on often very small patches of hue in the da Vinci work. The current paintings also wink an appreciation toward the industrial “finish fetish” surfaces of L.A.’s 1960’s-spawned Light and Space artists. Keep in mind that Guffogg worked from 1989 to 1996 as a studio assistant for another legendary L.A. artist, Ed Ruscha, and now lives and works in Ruscha’s old studio in Hollywood.

Of course the world regards Leonardo as an artistic as well as a scientific genius, so it is not surprising that Guffogg’s energized, interlocking ribbons lend themselves to associations with DNA’s entwined and iconic double helix pattern. They also evoke thoughts about the vibrating one dimensional “strings” of string theory, and thus feed speculation that they mesh the cosmos into a fleeting and perhaps at its essence intangible fabric of change and possibility. More quality than quantity, “reality” for these pioneering thinkers becomes inseparable from an individual’s act of observing experience itself.

In many ways such a poetic formula resonates delightfully with the methods, means, ambitions and goals embraced and employed by Guffogg in producing a remarkable body of work.